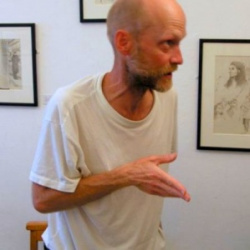 A wandering poet already famous on Write Out Loud for trekking across the Pennines on foot, from Leeds to Manchester, and beyond, to seek out live poetry events has now footslogged down to London from the north over three weeks, selling his poems along the way.

Joe Nodus turned up at the Poetry Café in Covent Garden last Friday night, to the great surprise of Write Out Loud’s news editor, Greg Freeman, and Gig Guide editor, David Andrew, and sold some copies of his poetry pamphlet at the launch of issue 2 of Grant Tarbard’s Screech Owl magazine.

Joe sat quietly at the back to listen to poetry from Freeman, Graham Mummery, Rodney Wood, David Cooke, Bethany W Pope, and Helen Ivory – but earlier he found time to recount his journey south.

His 250-mile journey, mostly on foot, and often along canal towpaths, started three weeks ago, when Joe set off for Manchester, walking via Halifax and Todmorden, where he picked up 150 copies of his poetry pamphlet Bulrushes that a friend had arranged to have printed for him. In Manchester he sold some copies, slept overnight in a park, then walked down to Stockport and on to Macclesfield via a cycleway. He had turned up a day too early for a poetry event in the town, so headed on down to the Midlands along the Macclesfield canal.

Joe said that one of his poetry pamphlet buyers in Stafford gave him a bus ticket that enabled him to reach Dudley. He carried on to Stourbridge – “I sold 15 booklets in an hour there” – and  Kidderminster, where “it chucked it down” and he sheltered from the rain for four days. Reaching Birmingham, he arrived, with inconvenient timing, at 3am. Feeling this was an inauspicious moment to try selling poetry pamphlets, Joe shrugged and headed on down the canals, calling in at Leamington Spa and Banbury, where he was befriended by someone who gave him a bed for a couple of nights. He reached Oxford with the help of a cheap train pass, and did good poetry-selling business at the Cowley Road carnival.

From Oxford he walked along the Thames to Marlow, where he stayed with his sister. She gave him a lift to help him rejoin the Grand Union canal, which took him to Wembley, where he looked over a new Hindu temple there. Then it was on to Paddington, Oxford Street, and Russell Square, and an overnight sleep next door to a church in Camden.

Joe’s pamphlet contains 22 interesting poems, including a number about his philosophy of life. Two lines from one perhaps sum up his outlook: “Lucky loser; gladness chooser, defeated, but free; / satisfied, with simplicity.”

He has now sold most of his 150 pamphlets. At the end of the evening he set off into the night, hoping to pass on more poetry to homegoing crowds; looking a little gaunt maybe, but with a gleam in his eye.

Write Out Loud's Risk A Verse at Huddersfield tonight ►

Joe cycled from Leeds to Birkenhead one evening to join us. I thought that was phenomenal and then you read this! No idea how he does what he does; his commitment to the muse is beyond question. A pleasure to have met you Joe - Best of!

The latest word from Joe a couple of days ago was that he was in Northampton, selling copies of the Bhagavad-gita http://www.asitis.com/ ...

Joe you are a walking shaman, storyteller of how it is thankyou

Joe, you are a poetry hero.