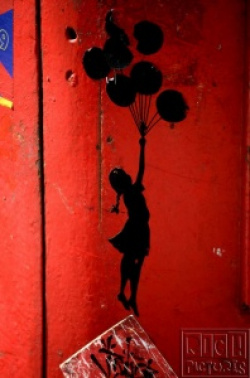 “Sweet Katarina, dance for me”,
said the man with the black balloon,
whose face looked rather like a wolf
if glanced in the back of a spoon -
and for each dance she did for him
he would pass her another string
with a midnight helium ball
tied on to its end with a ring.

She danced until her little hands
were full of the magical twine
and the villagers all agreed
they’d never seen dancing so fine.
The mayor raised his golden flask
and toasted the girl with his wine -
the lupine man with empty hands
said “Katarina, you are mine”.

The crowd gasped as her dancing feet
floated slowly up off the ground,
but still she grasped those silver strings
and uttered no audible sound.
They had no chance to pull her back
as the wolf, with a single bound
embraced her as she sailed away -
and they never were to be found.

They hear the howling in the woods
and it reminds them of the child
lost to the skies one autumn night
and they think of her running wild,
dancing each night for the werewolf -
entrancing, bewitching, beguiled -
praying that her innocent soul
will remain true and undefiled.

Some August nights when darkness falls
and the gypsies play a sad tune,
the people tell of a floating girl
soaring by on a black balloon.
Each year another one goes pop,
so they pray she will be home soon
and they gaze in wonder at the eclipse
of black orb across the  blood moon.

◄ Craiglockhart (Not Yet Diagnosed Nervous)