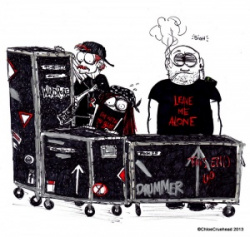 When heavy metal bands reform
it’s nothing like it was in the day,
when daily excess was the norm
and we needed drugs to help us play.
From riding into the teeth of the storm
we had to curtail our wicked ways.

Even though we all now wheeze,
run about and even fall,
bruise our elbows, graze our knees,
on the car park behind the concert hall.
We ask our roadie, if he’d please
find us somewhere better to play football.

We send him out to find some grass
so we can dribble, kick and pass,
If he can’t then we’ll kick his ass -
we play much better on the grass.

After the show, we avoid the rabble
by getting on the tour bus quick -
drawing the blinds and playing scrabble,
even though we’re pretty thick -
but it’s impossible to dabble
when some of the letters have been nicked.

So we send out the Roadie to find some E’s,
some P’s and Q’s and even B’s,
we just aren’t interested in the sleaze.
We play much better if we have E’s.

The singer hasn’t had a drink
since we split up in eighty-three,
so when we reformed he raised a stink
when the mini-bars were soft drink free.
It pushed him to the very brink -
the Roadie responded to his plea

to get out there and get some coke -
he was an accommodating bloke,
without it he said that he would choke -
he’d sing much better if he had coke.

We don’t want to put on weight
so we stick to home cooked food.
Much better, when you’re eating late,
to avoid the burgers or you’ll be screwed.
We want to rustle up a tasty plate
but have nothing on the rider, dude.

So we send out the Roadie to get us some hash -
peas and gravy, carrots and mash -
comforting food, nothing flash,
we play much better if we have hash.

To come down fast after the show
and to give us further kicks
we send the Roadie out for blow -
nothing beats the taste of Horlicks!
Then backstage we will all partake
and share it with our favourite chicks.

So look out world our band is back -
we think we’ve earned another crack
at stardom - we haven’t lost the knack.
Disagreeing might earn you a smack.

Really enjoyed this. Gave me visions of Status Quo meet Spinal Tap and a big smile for the rest of the day. Great inferences throughout.