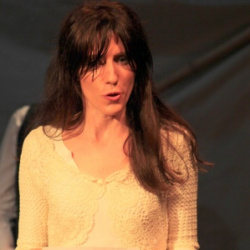 It was Bloomsday yesterday – Monday 16 June – in Dublin, and last night it was celebrated at the Blue Elephant theatre in Camberwell, south London, too, as students from the Poetry School, led by tutor and innovative poet Chris McCabe, collaborated to produce ‘Bloomsound’, the outcome of three terms’ work on James Joyce’s novel Ulysses.

Bloomsday is the anniversary of Joyce first stepping out with his future wife, Nora Barnacle, and the day he fixed for the wanderings of Leopold Bloom, Stephen Dedalus, and a comprehensive cast of Dubliners in his great, modernist work.

One of the many arresting facets of this production was the way modern words such as “algorithm” were introduced.  With its stream of consciousness style and bombardment of images and sounds, Ulysses anticipated the internet by almost three-quarters of a century, as ‘Bloomsound’ emphasises, imagining Bloom logging on search of knowledge, distraction and human contact, but still wedded to his unfaithful wife: “Password: Molly 123”. Rebecca Mackenzie briefly adorned herself with the cardboard computer screen, plus apple on top, as an additional visual aid.

The literary references are updated, too, with a nod to Allen Ginsberg and Howl in the episode trailing Stephen Dedalus and his fellow medical students around the city night haunts: “I saw the bullish minds of Dublin’s generation befuddled by lechery, drunken irreverent males.” The note of disapproval might be connected to the fact that the readers/poets in the cast were almost entirely female, save for McCabe, and Edward Venning, playing “Mr Mackintosh”, his name examined in typical Joycean fashion: “Mister Mac in tosh. Mister tosh in a mac.”

It seems remarkable now, but Joyce had great trouble in finding a publisher for Ulysses because, despite the complexity of the book as a whole, he also employed many everyday words everyone could understand. In the 1920s some didn’t feel they should be between the covers of a book. A brief reference to a “blow job” accordingly appears in the ‘Bloomsound’ version, developing the episode when young Gerty MacDowell knowingly displays herself to Bloom, sitting on a nearby bench.

Molly Bloom’s final monologue famously ends with the words “yes I said yes I will Yes”. ‘Bloomsound’ ended less positively, with Sophie Herxheimer reflecting on the state of the Blooms’ marriage, a marriage blighted by their son’s early death … “what hell did we furnish ourselves to live in, a cosy hell where our dirt is strewn in the sight of all comers”.  A downbeat note to finish on, perhaps. On the other hand, the playing of the song, ‘Those Lovely Seaside Girls’, a song that is mentioned several times in the book, before the production began was a confidence-building touch for Joyce aficionados. You felt at once, that this was a show that knew what it was about.

The production’s programme notes said: “You don’t need to have read Ulysses, but please be inspired to take up with it, if that has so far been an ambition unfulfilled.” McCabe said after the show that Joyce’s novel was full of “found text, and sound poetry”. He added that it had “changed my life”, when he first read it aged 17, and had influenced all his thinking about literature ever since.

Joyce foresaw the problems his book would create for readers when he had Molly cry in exasperation: “O, rocks! Tell us in plain words!” And it is true that not all the Poetry School students that enlisted back in September, with the first term taken up with reading the book, lasted the full course.  But the book’s many enthusiasts, among which I count myself, know that it is worth persevering with, for its warmth, humour, and humanity. (I recommend Anthony Burgess’ Here Comes Everybody as an excellent guide). And as an exploration of its poetic possibilities, ‘Bloomsound’ was an exhilarating, stimulating odyssey, well worth undertaking. Greg Freeman

◄ 'It's still a game that anyone can play with anyone, anywhere': Hollie McNish captures that World Cup moment