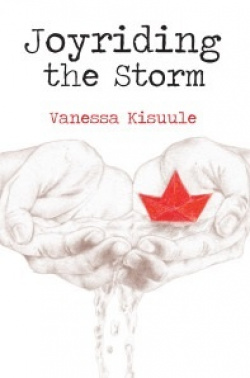 Vanessa Kisuule  is a multi-slam and award-winning young poet, who was voted best spoken word performer in the 2013 Saboteur awards. She writes plays, and one-woman shows, and performs regularly at festivals. Joyriding the Storm is her first collection.

There’s a swing to her poems, a rhythm and momentum, and they are liberally sprinkled with rhyme, assonance and alliteration. Satisfyingly so, to this reviewer. I can “feel” them as performance. They are reflective and contradictory in ‘For The Record’, turning on just one pivotal line in ‘Crayon’, and jam-packed with original metaphor and simile in ‘Sex Education Class’:

Everyone is having sex

I longed to be a six second centrefold spread

In the lad’s mag of malevolent minds

I wanted my own piping hot slice of the lie

To scald my tongue on the heat of desire …

This poem perfectly captures the often stumbling way into womanhood, the vulnerability of a young woman on the verge of exploitation, of expectation, and the sheer heat of those burgeoning hormones.

Kisuule examines and analyses the many facets of human relationships. In ‘The Incidental Sister’, we have the opening lines of,

I knew you would suck up time and space

This recounts the entry into her life of her twin brothers, born when she is a teenager.  The poem beautifully unfolds from bitter and resentful beginnings to her falling in love with them and helping them to understand their world. She tells them that as black children in a white environment, they will,

Why people won’t understand you

Whether you speak a different strain of English

I remember now how strange and difficult it was

You are two black pebbles in a blanket of snow

The other kids will only have seen faces like yours

You will get used to it”

Together with the poems, there are also prose pieces, with a wonderful flow to them.  ‘Flesh – an excerpt’ is exceptionally fierce and powerful writing, about societal and male ideals; race, gender and expectations; who we really are, and what the world wants us to be. And how we survive, or not, within that sphere. ‘Playground Debt’ actually made me cry. Composed in an almost childlike nursery rhyme pattern, it deals with playground racism. “Justine, the undisputed queen of the under seven scene” is the agitator and creator of a racist song that targets a young boy in the playground.  Although Kisuule doesn’t join in with the song, neither does she defend the young boy:

I struggle to remember the words of the song

But he sat as they spat out that word

Picked up off parents’ tongues

And scraped off street corners

His face twisted in a stoic refusal to show any pain

Entranced by the song

And its tribal dance

It didn’t occur to me

To condemn their gluttonous glee

So relieved was I

That they weren’t singing about me

Full of painful truths, and beating its own chest, this piece took me right back to my own Justine, except her name was Linda.

The blurb on the back of the book describes Kisuule as “offensively talented for someone still quite young”, and I can only agree.  My one quibble is that punctuation is entirely absent in the poems, although not in the prose pieces. I must admit to finding it slightly irritating in the poems as it quite often slowed down my understanding in a clumsy way.  Although you could argue for performance not needing punctuation, the pauses and other devices within a performance stand in place of punctuation; therefore, I do feel it is required. Also, every line is capitalised, making comprehension even harder. I had to re-read several lines to deduce meaning – it disrupted the all-important performance flow.

But that is really the only quibble. Kisuule’s poems are exciting, breathless, and intelligent. Having read several other offerings by Burning Eye, I can confirm that performance poets, as we all know, are just as varied, funny, profound and insightful as so-called “page” poets, and they deserve their mark on the publishing world.