'It's still a game that anyone can play with anyone, anywhere': Hollie McNish captures that World Cup moment 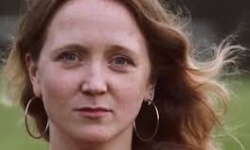 Top performance poet Hollie McNish may have launched a bid to become the next poet laureate. She is at least certain to capture all football lovers’ hearts with her latest poem, ‘This Game Means So Much’, to celebrate the 2014 World Cup, which began in Brazil on Thursday night. In the poem McNish says she has been a football lover “since I was a kid … when I’m touring on my own I always take a football with me … it’s still a game that anyone can play with anyone, anywhere”.  She looks forward to the times when “pubs will be rammed” but adds that “I think the story of these games is much more than who will win them … will all of these stadiums even get finished … will the protests go on … will shops realise ninety quid for a shirt is really too much?” . She concludes: “I’ll be watching with friends. The story has started, but how will it end?”

Rhythmic, vibrant and in your face. She certainly captures this Brazilian Football Fest... and I bet she can explain the 'offside' laws. Wonderful observations.