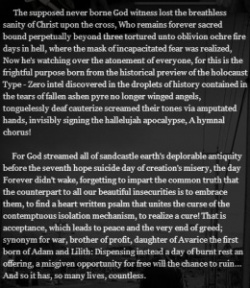 The first hypnosis occurred as he stare down from the broken white portrayal hearted cross, An unholy smoke justification to put greed forward any cause, without delving to the bottom of a pretend whisky spine glass, where desperately intolerant profit dreams seem wasted if kept immortally repressed in a book of uncommitted commandments entitled: Equinox Psalm of Offences, never to be woken.

He took in the silent pages of unyet written star ink haikus, the poetry of every sandcastle universe soul throughout orion's concept hour refuge of preproduction glass, keeping time, wherein was witnessed the attention immoral deficit of their last moments, as they lay dying, unable to break the Death Angel's scythe as it tore open the mending tattooed epidermis cycle, carapace husk of ghosts,  all suspended dread in stomach tidal ship naughts as each realized they're no more than an echo.

The supposed never borne God witness lost the breathless sanity of Christ upon the cross, Who remains forever sacred bound perpetually beyond three tortured unto oblivion ochre fire days in hell, where the mask of incapacitated fear was realized, Now he's watching over the atonement of everyone, for this is the frightful purpose born from the historical preview of the holocaust Type - Zero intel discovered in the droplets of history contained in the tears of fallen ashen pyre no longer winged angels, tonguelessly deaf cauterize screamed their tones via amputated hands, invisibly signing the hallelujah apocalypse, A hymnal chorus!

For God streamed all of sandcastle earth's deplorable antiquity before the seventh hope suicide day of creation's misery, the day Forever didn't wake, forgetting to impart the common truth that the counterpart to all our beautiful insecurities is to embrace them, to find a heart written psalm that unites the curse of the contemptuous isolation mechanism, to realize a cure! That is acceptance, which leads to peace and the very end of greed; synonym for war, brother of profit, daughter of Avarice the first born of Adam and Lilith: Dispensing instead a day of burnt rest an offering, a misgiven opportunity for free will the chance to ruin... And so it has, so many lives, countless.

The saviour abandoned hope for human choice, for too long the evermore overseer endured the emotion terror suffering of inhumanity's lethargic to the antidote of healing and so history carries on the  harbinger's currency of benign disequilibrium, frailty on infinite repeat, Until the hive intolerant mind new adage speak regime collapse, He'll remain an immortal pessimist, trapped eternally in the strangely dim lost idol interest realms of conjoined apathy of the fallen, captured pride reformation aspirations  of  sulphur's last standing Lieutenant, Angel of Fear.

In earnest anticipation of,