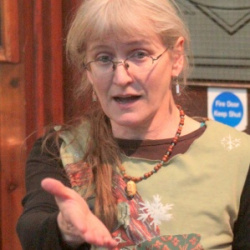 “We started eight and a half years ago, and forgot to stop.” That’s how co-organiser Rose Drew, pictured, refers to The Spoken Word poetry and prose open mic night in York, which she runs with husband Alan Gillott, and which last week held its 101st consecutive monthly night at The Exhibition pub.

On Tuesday this week, in the packed conservatory at the back of the pub, where entry is free and there are free nibbles for poets and listeners too, there was a generous and varied mix of regular performers and newcomers, particularly from York’s large student community.

As compere, Rose is enthusiastic and energetic, announcing what seemed like a blizzard of forthcoming poetry events in York, as well as encouraging performers on the night, but also gently warning them of the “hug of death” if they strayed over their time limit.

Among the regulars are The Spoken Word on Tuesday were poets such as Andrew Brown, Henry Raby, and Write Out Loud stalwart John Coopey, whose contribution included ‘Lies and Lies’, a political satire to the tune of Simon and Garfunkel’s ‘The Boxer’. (John has available a budget-priced CD of his rewritten pop songs that reguarly feature on Write Out Loud – he didn’t ask me to say that, but I will anyway).

Rose keeps a sharp lookout for talented newcomers to The Spoken Word, and a dramatic performance from Mungo Tatton-Brown undoubtedly caught the eye, as did the poetry of another newcomer, Philippa Blakey.  Rose and Alan also run York publishers Stairwell Books, and poets include Steve Nash, the only bloke nominated in the shortlist of five for best spoken performer in this year’s Saboteur awards.

It’s always good to return to York, where I lived in the late 1970s/early 80s. The Spoken Word doesn’t hark that far back, but its longevity is to be applauded, nonetheless. Here’s to its next 100 nights.

Write Out Loud Bolton at the Brooklyn on Sunday ►

Wow, thanks for the plug, Greg. Nice to bump into you again for the catch-up.
The thanks goes, as you indicate, to Rose and Alan who continue to organise the event.