John Cooper Clarke: 'Poetry is not something you retire from. There is no heavy lifting involved' 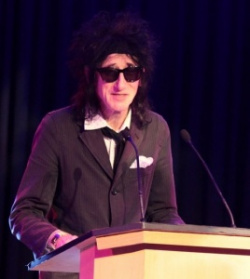 John Cooper Clarke has talked of turning 65, living in Essex, how Pam Ayres was a great inspiration to him – and how the only politician whose language “I even remotely understand” is Ukip’s Nigel Farage.

The veteran poet, aka JCC or the Bard of Salford, said in a Q&A interview with the Observer that he celebrated turning 65 recently by “having a meal out with the family. Thing is, I still can't imagine life without me being in it. I'm maybe a bit more health conscious than I have been in the past. But it doesn't involve a regime of any kind, I don't visit any gymnasia, I don't eat rubbish but I never did. I don't have any lifestyle advice.”

The bard of Salford, famous for poems such as ‘Evidently Chickentown’ and Beasley Street’, has lived in Essex for 25 years. He said: “It is the longest I have lived in any county. I feel like an Essex bloke. I don't watch Towie, mind.” He added that no longer looked on Salford as home “Not now. I've lived in Essex 25 years with my family now. My brother still lives in Salford, works for the post office. But even the tower block that my mother was slum-cleared into has been demolished, so I have two generations of slum clearance. She loved that tower block – she used to grow her own tomatoes on the balcony.”

He also spoke about his mother following his footsteps as a poet. “She was late in life, yes. She must have read my stuff and thought: well, if he can do it, how difficult can it possibly be? She was big on Betjeman. And then Pam Ayres. And I have to say that Pam Ayres was a great help to me too. I was pushing for a career in poetry and of course the received wisdom was that you would never make a living at it. Pam Ayres was the one person I could point at and say: ‘Yes, you can.’ I took a great deal of encouragement from the upward trajectory of Pamela Ayres.”

Asked which way he would vote, he said: “It's a tough call. I wouldn't recommend any of them. I suppose if I had to I would vote Labour but only out of blind class hatred, nothing else. That's what keeps these bastards coming back. To be honest, the only one whose language I even remotely understand is Nige [Farage]. Shoot me down in flames. Everyone else: they talk about nothing that seems to matter.”

He was also asked how long he could see himself touring and performing. His reply? “Poetry is not something you have to retire from. There is no heavy lifting involved. I have no intention of ever quitting. Don't worry about me. I pray every day for my health and that of my family. After that, what do you want but a few quid in your pocket? As they used to say on that show Stingray: ‘Anything can happen in the next half hour.’ I've always tried to live with that thought in mind.”

You can read the full Observer interview here

Portrait of the artist as a young reporter: tour of Dylan Thomas haunts this weekend ►

I am 64 and only just getting started with performance poetry

Excellent, pearls of wisdom from Stingray. What more could you want?