Nominations deadline for Saboteur awards is end of April 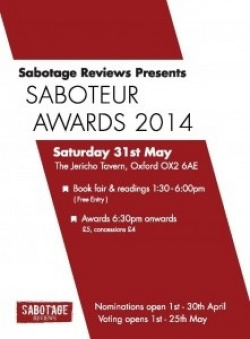 Nominations have opened for the 2014 Saboteur awards, which include best spoken word performer, best spoken word night, and best spoken word show, as well as new categories for best reviewer and best collaborative work. The awards are run by the website Sabotage Reviews, which is dedicated to promoting literature such as pamphlets, small presses, and magazines, as well as performed poetry. Last year’s Saboteur Awards was the first to be celebrated as an event, at London’s Book Club. The deadline for nominations is 30 April, with the shortlist announced on 2 May. Then the voting deadline is 25 May, before an awards night on 31 May at Oxford’s Jericho Tavern. You can read the rules and conditions and nominate on the Saboteur site here