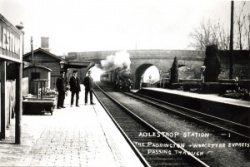 One of England’s most famous poems is the subject of a competition on its centenary. ‘Adlestrop’, by Edward Thomas, was written about a stop made by his train at a deserted country station in June 1914. His recollections of that moment on a hot summer afternoon, when no one got on or off, were later distilled into the poem. Thomas was killed by a shell in the first world war in 1917.  To celebrate the poem, the village of Adlestrop in association with Cotswold Life is marking the centenary of the train journey with the poetry competition. The £10 per poem entry fees are to raise funds for the parish church of Adlestrop, St Mary Magdalene, which needs £40,000 after a fabric review. Entrants to the competition are asked to write a poem of 16 lines which has been inspired by the original poem. The judge will be poet PJ Kavanagh, and the closing date is 30 April. More details. Adlestrop station in Gloucestershire closed in 1966. The station building was demolished soon afterwards, and a station seat and nameboard were moved to a bus shelter in the village. You can read ‘Adlestrop’ here

Nominations deadline for Saboteur awards is end of April ►

Competitions » You can do more than just clap for the NHS – support its staff by entering our Beyond the Storm poetry competition!

I'm a huge fan of Edward Thomas, but can't say I've ever been directly inspired by this particular poem of his. Having said that, I can still certainly see why it's his most famous.

Good luck to all who decide to enter! :)

it is interesting to learn how a poem is born