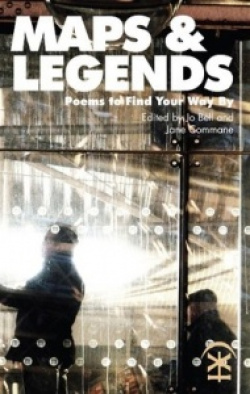 Midlands-based Nine Arches Press has been around for five years. To celebrate that achievement – no small feat in the world of poetry publishing – they have produced an anthology which can be viewed as a sampler of the talents they have welcomed and encouraged over that time, including David Morley, Jeremy Reed, Chris McCabe, Matt Merritt,  Luke Kennard, Mario Petrucci, Angela France, Maria Taylor, Daniel Sluman, and Tom Chivers, to name but a few.

Each of the 24 poets in Maps & Legends is generally granted a generous selection of at least four poems. The anthology opens with Phil Brown’s sound advice to jot down poems and ideas on whatever comes to hand – bus tickets, newspapers, napkins – rather than notebooks: “Throw away your moleskins and let the poems loose”. (‘Stage Fright’).

This testing of the boundaries is reflected in Tom Chivers’ ‘A Guide to Email Etiquette’, which lists a number of sound practical tips, but also includes more oblique advice such as “Don’t gape at Puppet-shews. / Don’t talk about the Press.” The electronic media theme continues with Simon Turner’s ‘Digital Birmingham’, which is described as a “Google poem”. But it has an old-fashioned ring too, in its listing and staunch defence of overlooked Midlands virtues: “Birmingham is the birthplace of Cadbury’s chocolate / … Birmingham is as peachy as this woman’s jumper”. A sense of nostalgia mingled with modernity is also reflected in the seven-page extract from David Hart’s ‘The Titanic Cafe closes its doors and hits the rocks’, mourning the loss of a much-loved canalside café at Selly Oak: “What is to be waste / and what to be kept, / what to cancel out / and what to treasure?”.

However, there is not much that is parochial about this anthology, even if the subject matter is often geographical, reflecting in part its title. From further afield come Chris McCabe’s poems about London, including his ride on the 176 bus at the ‘Elephant & Castle’, a bottle of Methadone rolling against his feet on the top deck. The other half of the Whitehall Jackals collaborative collection, Jeremy Reed, contributes poems such as ‘Fleet’, about one of London’s lost and hidden rivers: “cold bacterial soup, a mucky rush / that puddles on the road sometimes / in thunder-rain at Holborn and Blackfriars”.

There is plenty of sharply-observed nature poetry in the mix, too. Matt Merritt, who is also a wildlife journalist, contributes poems about woodcocks, yellowhammers, and reflects on rhythmic noises coming from a neighbour’s bedroom that sound like migrating Canada Geese - although maybe only to a true birder - in the prose-poem ‘Svalbard’. David Morley’s walks that he took with his friend Nicholas Hughes, a fisheries biologist and the son of Ted Hughes and Sylvia Plath, who killed himself in 2009, are poignantly recaptured with sightings of salmon, midges, darters, skimmers, and dragonflies. I heard Morley read some of these poems at the Southbank Centre on National Poetry Day last year, and was moved then, too.

It may be that Maria Taylor provides a cold shower to any sense of lyricism, and even of poetry itself, with her reflections on teaching Philip Larkin, and the progression from “thirty eager teenage faces” to “ ‘I hate Larkin’, says a small girl with eczema” and finally discovering “a charred copy of High Windows / behind the gym with a used condom and a can of Lilt”. This be the verse. There’s also more than a flavour of Larkin’s mordant take on life in Taylor’s ‘Mr. Hill’, whose widow, uncertain what to do with his ashes, “takes another drag, decides to post / him back to his lady friend, confiding to me / even though he’s dead, he’s still a bastard”.

Maps & Legends, edited by canal laureate Jo Bell and Nine Arches’ own Jane Commane, describes its contents as poems “to find your way by”. Certainly, this solid and satisfying collection of signposts to established and up-and-coming poets takes you in all kinds of directions. It’s an excellent guide, and you won’t go far wrong.

'Saying the unsayable': editor Sophie Hannah talks about The Poetry of Sex ►