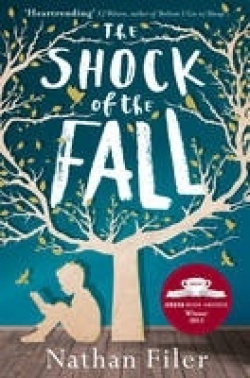 A poet and creative writing lecturer has won the £30,000 Costa Book of the Year with his first novel. Nathan Filer was awarded the prize for The Shock of the Fall at an awards ceremony in London. He was married a few days earlier.

Filer  is a lecturer at Bath Spa University, and still works shifts as a mental health nurse, and will continue to do so, according to the Independent.  He said: “There is something to be said to having more to your life than writing. The other work I do has always been important to me.”

His novel about a teenager's descent into mental illness was bought by HarperCollins for a “substantial” six-figure sum. Rose Tremain, chair of the judges, said: “For a first novel it is astonishingly sure-footed.”

Filer has performed over the years at festivals and literary events across the UK as a stand-up poet, and his poems have been regularly featured on BBC radio.  In 2005 his short film Oedipus was screened on BBC3,  won the BBC best new film maker award, and a best poetry film award in Berlin in 2006.

Each year five Costa category winners are announced, with one book later chosen as the book of the year. Earlier this month it was announced that Michael Symmons Roberts had won the Costa poetry prize for his collection Drysalter, which also won last year’s Forward prize.

◄ Has 'performance poetry' been replaced by 'spoken word'? Discuss

Just finished reading this and it's brilliant.