'Saying the unsayable': editor Sophie Hannah talks about The Poetry of Sex 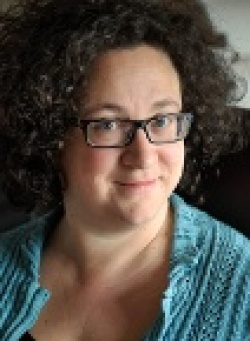 A much-talked-about new poetry anthology, The Poetry of Sex, edited by Sophie Hannah, pictured, has been described by publishers Penguin  as “raucous and highly enjoyable”. But Hannah, a poet and successful crime novelist, was keen to emphasise, in an interview on BBC Radio 4’s Woman’s Hour, that her book was not meant to be “an anthology of sexy poetry”, adding  that some of her favourite poems in it were those that were honest about human relationships, “ones which in some way say the unsayable”. A short extract from a long, graphic poem by WH Auden, ‘The Platonic Blow’, which he published under a pseudonym in the 1960s was read out on the programme. The book includes work by Shakespeare and Marvell, DH Lawrence and Philip Larkin, as well as two poems about Daniel Craig, including this one by Rich Goodson. There is also one by Hannah herself, called ‘Rubbish at Adultery’.  Hannah has published five collections of poetry - her fifth, Pessimism for Beginners,  was shortlisted for the TS Eliot award in 2007 - and also writes bestselling psychological crime fiction. She will be joined by some contributors to the anthology at a reading at Canada Water library in south-east London, on Wednesday 12 February, as part of Southwark libraries Rhyme and Reason festival.

Oh thanks Greg - I've got it to work now. I probably needed to shut down the computer before the new programme would work. It's certainly nitty gritty stuff - all about real life - glad it's not mine though!

But it still beats chaffinches :)

Hmm. The inaudible, as well as the unsayable? Worked all right for me, although there is a 'Parental Guidance Lock' message at the start. Could that be anything to do with it?

This sounded fun - but I can't get it to play - despite downloading flashplayer?