Tribute to poetic protest as all Pussy Riot members are freed 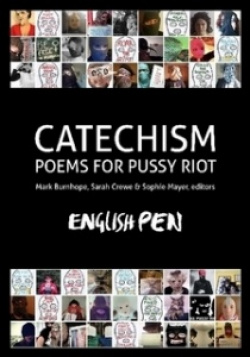 English PEN has welcomed the news that all members of Pussy Riot have now been freed from jail  in Russia – and paid tribute to the way that the protest poetry anthology, Poems for Pussy Riot, helped keep the case in the public eye.

Three members of the punk protest band were jailed after being found guilty of hooliganism motivated by religious hatred and sentenced to two years in prison for a performance at Moscow's main cathedral in March 2012. One, Yekaterina Samutsevich, was released on a suspended sentence in October 2012.

On its website English PEN said:  “In 2012, in order to rally support for the group, we launched ‘Poems for Pussy Riot’, inviting poets from all over the world to write creative responses to their cases and the issues they seek to highlight. Within a matter of weeks we had received more than 100 submissions from a wide-range of contributors, including stand-up comedian Phill Jupitus, award-winning Scottish writer Ali Smith, and the Australian poet John Kinsella. To coincide with Pussy Riot’s appeal hearing on 1 October 2012, we self-published the best submissions as an e-book and print-on-demand anthology, Catechism: Poems for Pussy Riot."

The anthology was edited by Mark Burnope, Sarah Crewe and Sophie Mayer.

English PEN said: “The collection has since been awarded the 2013 Saboteur Award for Best Poetry Anthology, while proceeds from sales and related events have been divided between the Pussy Riot Fund … and supporting the ongoing work of our Writers at Risk programme.

“Crucially, the poems afforded us the opportunity to keep Pussy Riot’s case in the public eye. In additional to regular coverage on our website, we have held public events across the UK and Ireland, including an event in the houses of parliament, a poetry protest outside the Russian embassy and, most recently, two performances of ‘Pussy Riot: Hunger Strike’ in collaboration with the Bush theatre in London. We were also honoured to have the opportunity to host two other members of Pussy Riot during their trip to London in 2013, and to organise meetings with the UK press and key supporters. We will continue to do all we can to support them over the coming months, as they readjust to life outside the prison walls.

“If you would like to contribute to the Pussy Riot fund, you can do so here. Alternatively, please buy a copy of our anthology Catechism: Poems for Pussy Riot, the proceeds of which will be divided between the fund and our ongoing work on behalf of writers at risk around the world. Thank you.”

◄ Poetry is our beating heart: a very happy Christmas to all

Clive James talks about poetry, Dante, and illness on Radio 4 ►