Rhyme and metre and the rhythm of rail at Sowerby Bridge 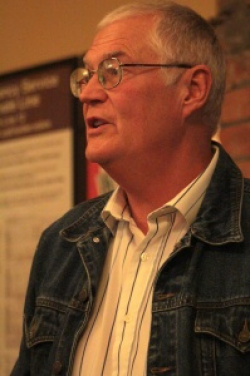 There were poems about the North Yorkshire Moors railway and the Ribblehead viaduct, about liaisons in carriages and seaside specials, about old tracks turned into walkways, and even about slinging chips at passing trains. What they nearly all shared in common was their subject: railways.

There’s something about the rhythm of a train over tracks that lends itself to rhyme and metre, and at the Jubilee Refreshment Rooms at Sowerby Bridge station on Thursday night we were able to sit back and let the train take the strain.

Branwell Bronte was briefly a railway clerk at the original Sowerby Bridge station, a little further up the line, back in the 19th century. Compere Freda Davis continued the literary association by introducing the Railway Lines poetry night, and contributing her own memories of trains in Liverpool. John Coopey, pictured, read two poems from the excellent 2010 Stairwell Books railway anthology,  Along The Iron Veins,  conveying a steam engine slowly starting and eventually coming to a halt on the journey from Pickering to Whitby in the delivery of his poem ‘NYMR’, and providing evocative memories of the excitement and nostalgia of steam in ‘7 O’Clock Brit’. By contrast, Gaia Holmes travelled by bus with her poem about the smells of other passengers, one giving off a whiff of “raspberries and loneliness”, while another “reeks of guilt”.

A number of the poets who read have had poems published in a pamphlet to accompany Sowerby Bridge's first arts festival. I suppose I ought to mention that I was enjoying my first outing as a guest poet at the refreshment rooms event, which was part of the festival. For a self-confessed trains nut, to find yourself reading railway poetry at a station … it doesn’t get much better than that. Greg Freeman

You lucky lot. And Gaia too. If only 'wishes were horses.'

You should read at Chinley station John, except that, of chins, you appear to me to have but the one. Excellent poetry, excellent readings. Greg, you are too self-effacing. You read some wonderful poems in your excellent set. Well done Freda. I won't mention the dandelion and burdock. Oops.

What chins? Blame the camera angle, John! I'd been standing for a long time, and had to sit down. I've been re-reading '7 O'Clock Brit' in the anthology. I love that poem, more with every reading.

You might have cropped my chins from the photo, Greg!
Good night, good reads, good company.