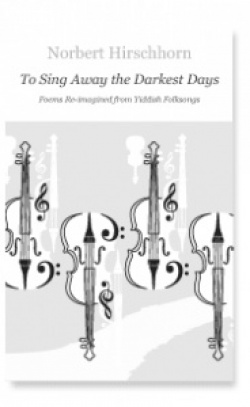 No book which looks at the Jewish race through its language and culture, as Hirschhorn’s does, can completely avoid asking all the unanswerable questions.   But it seems to me this collection of work is less about the why of Jewish history, more about the who?  It is an attempt to get close to the heart of a people, of a  wisdom and oral tradition, through an interpretation of their own folk tales, of songs and stories handed down.

Jewish identity, away from appalling stereotypes and emotional, psychological and political pressures, is elusive. It is through Hirschhorn’s translation of the altered German known as Yiddish, that a hidden people begin to emerge. As with any volume of translation, there are potential problems with the variety of possible meanings, of word combination, of cultural idioms - and at least in this particular case of re-imagined folk tales - of back stories told at a remove of centuries.  The idea behind this collection, however, is not one of faithful reproduction, the author tells us,  but of  “… entering into the lyrics to distil their essence -  to advance, enlarge and, sometimes, subvert the original in order to create a vibrant poem in English”.

So what is this language and who were the people who spoke it? Hirschhorn tells us: “Yiddish was the principal daily language of European Jews for nearly one thousand years.  Yiddish is an expression of the dispersal of the people through many lands: a fusion language based on Middle High German and written in Hebrew script, with additional vocabulary and syntax from Slavic, Hebrew, Aramaic, and other sources.”  It was in fact, the language of the diaspora.  For the writer personally,  it is also a language of half-remembered childhood pejoratives and shoulder-shrugging ironies (shiksa, meshuganah, tuchas, lokshen) weighted down with an unimaginable baggage that could never be discussed.

This collection is organised into two parts: the re-imagined poems in the first part, and a section called Sources, Transliterations, Literal Translations and links to Music in the second.  The author states in his introduction: “For this project I had to train myself to read Yiddish more or less fluently, with a Yiddish-English dictionary by my side …”

It is through the maternal line that Jewishness passes, and the mother figure is central and of paramount importance to the idea of family in this culture  - ironic perhaps for a faith in which patriarchal orthodoxy still predominates.  It is, Hirschhorn says, no coincidence that Yiddish is known as the mame-loshen, the mother tongue.

No consideration of the perception of Jewish family can take place without including the "Yiddishe Mama", probably one of the most known - if dated -  concepts of the Jewish mother.  In this collection, the poem ‘A Yiddishe Mama laments’ tries to bring to life the tragic-comic essence of this vanished character; comfort-giver, home-maker, broiler of aged chickens for soup.

So now he sends me this song, A Yidishe Mama, Me who

Fed him from my breast, rocked him in his cradle, wiped his

…  my prince, my darling, my scholar.

then he runs off with a Shiksa.

By me, he’s dead already.

I do not feel that the poem entirely succeeds.  The penultimate line would have been a stronger ending than the one used since the final line, despite containing an emotional truism, for me, tipped the balance of the piece into melodrama.

The beautiful but tragic ‘Cave Song’, a poem about a Sephardic Jew forced by the Spanish Inquisition to practise his faith in secret, takes the form of a conversation between two people:

Yet Maran who will save you

when our foes hear your singing?

When inquisitors come to seize me,

I will drown them in my song

Dannie Abse, in his endorsement of the book, refers to “the gifted fiddler of words on the rooftop”:  so completely has the film version of Sholom Aleichem’s tale of Tevye the Tailor become absorbed in the cultural psyche that no recounting of Jewish history seems quite complete without an appearance by him.   Indeed, Zero Mostel, who played the leading role on Broadway,  is quoted by Hirschhorn as saying: “All Jewish folksongs are about Jewish tailors.”   Unsurprising perhaps;  the concept of “stitching something from nothing” is a wonderful metaphor for life, especially life lived on a knife edge of poverty and persecution.

What Tevye brought to the table as well as song was humour.   I felt that the poems lacked, if anything, their sufficient complement of Jewish humour. Although there is nothing funny about some of the themes, equally it is in the idea of a people for whom the comic and tragic have been so closely interwoven that the Jewish identity is most strongly foregrounded.  It surfaces in parental fears for the children’s marriage prospects, or in an obsession with hygiene in the midst of the pogrom – something which the film Fiddler on the Roof recognised in the scene where Golde is frantically sweeping the floor to “leave the place clean”, even as her family is being evicted from their home in Tsarist Russia.

Two recent visits which I have undertaken, one to the Anne Frank house in Amsterdam and the other to Daniel Libeskind’s Jüdisches Museum in Berlin, impressed upon me how the Holocaust twice exterminated the Jewish race, once physically and the second time by condemning the memory of a living people to be synonymous with disappearance and death camps.  The question that once no one dared answer: “Are you Jewish?” has become the question that no one dares ask.

Yet this is not a book about death, but about life.  Here are the ties of blood.  Here are also dreams, of warmth, of food, a roof, as well as  an overarching sense of elegy which appears to come less from translation, more from the racial heartbeat:

The golden peacock has flown

If there is to be a revival of Yiddish, as the author states that there is, then Mr Hirschhorn will be at its forefront.  This is a scholarly achievement and a brave book.  It is a book that needed to be written. Frances Spurrier

Rhyme and metre and the rhythm of rail at Sowerby Bridge ►

Stimulated my interest Frances. I have been a long time fan of Isaac Bashevis Singer of whom we hear little these days. His Jews are real flesh and blood people with the same strengths and weaknesses as the rest of humankind, people who "are not only Nazi victims but victims of their own personalities and fate" (intro to "The Enemies:A Love Story". (Penguin 1977) New York's Jewish Daily Forward, a Yiddish newspaper must have been really forward, and brave, to publish his warts and all stories of life through Jewish eyes.He won the Nobel Prize for Literature in 1978. Any reason why we hear little of him these days?