Behind the scenes at the Poetry Library 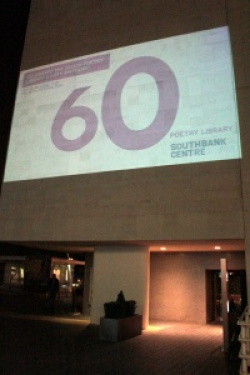 The pleasures and benefits of using the Poetry Library are extolled by fellow 60-year-old John Hegley in his poem, ‘From a Grateful Borrower’, one of six currently beamed on to and broadcast from London’s Southbank centre.

The Poetry Library, perched high up on the fifth floor of the Royal Festival Hall, is celebrating its 60th anniversary this month. Unlike many public libraries, it faces no imminent threat of closure, thanks to its continuing Arts Council grant, and is instead looking forward to moving in 2017 to a new, bigger and more accessible and visible location alongside Waterloo bridge, where it hopes to increase visitor numbers by 60 per cent, as part of the Southbank centre’s big Festival Wing redevelopment.

On Wednesday night current  Poetry Librarian Chris McCabe gathered with former librarians Jonathan Barker, Mary Enright, Simon Smith, and Miriam Valencia to chat about the library’s past, present and future, and swap anecdotes about floods, feuds, and foiled thefts, in a talk billed as the Poetry Library’s “secret history”.

Have you ever wondered how a poetry anthology is compiled? The answer: famous poets like Ted Hughes “trekking for days” at the Poetry Library, laboriously combing its shelves for nuggets for anthologies such as The Rattle Bag. Philip Larkin was described as an “important friend” of the library. Other regular visitors have included Seamus Heaney, poetry programme presenters such as Roger McGough and Michael Rosen, looking for material, as well as the eccentric Ivor Cutler.

Former librarian Miriam Valencia talked about the magic of the library for a poet that has just had their first published in a magazine, and then finds the magazine in the library rack, with their poem in it. I could relate to that. We heard of the library’s role as a place where feuding poets from different factions could meet on neutral ground; a potentially disastrous flood in 1999 that led to sodden books being hung out to dry on lines around the library for weeks afterwards; and the occasional rugby-tackling of potential poetry thieves, an important skill for all librarians to possess.

The library’s collection of poetry in Britain goes back to 1912. Its books, pamphlets, magazines, audio cassettes, CDs video and DVDs are available for reference or loan, and it welcomes visiting schoolchildren as much as researchers and anthology compilers. Online it lists events, competitions, magazines and much more. It was opened in 1953 after an initiative led by Eric White, its opening ceremony in Mayfair attended by TS Eliot and Herbert Reed, and moved to its present home at the Southbank in 1988. These days it is offered so many poetry books that for the first time it is having to turn some away. Chris McCabe was careful not to let the words “vanity publication” escape his lips, but made it clear that collections by poets who have already appeared in magazines have a better chance of being accepted.

And how do the former librarians see it? Jonathan Barker quoted Michael Horovitz’s maxim, that libraries should “communicate energy”. Simon Smith praised its huge collection of poetry pamphlets, its “Reithian, old-fashioned values,” and the fact that it has been “allowed to go its own way”. Miriam Valencia said she believed it generated “warmth, fellow-feeling and pride”. You can’t ask for much more than that.

* There are still tickets available for the Poetry Library birthday party, hosted by Simon Armitage, at the Queen Elizabeth Hall, on Tuesday 29 October. More details

◄ The Write Out Loud beat is back at Marsden jazz festival

Thanks for your comment, MC. Another remarkable thing about the Poetry Library is that they don't charge for overdue books, a fact that John Hegley refers to in his poem. But, as he also points out in the same poem, this is not a concession to be taken advantage of!

A marvellous asset to UK creative life - and how
amazing that folk should actually prize poetry
so much that they could consider stealing it!
I write as one lucky enough to have had a
published collection accepted (see the "cover"
accompanying this post) - and if anyone
should try to steal my book then I would feel
privileged for the unsought compliment implied!!