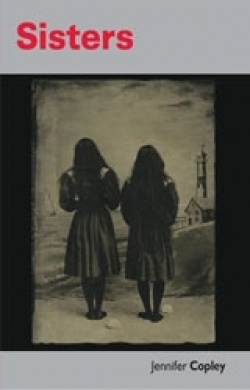 If death is the last taboo this book breaks it open and stares unflinchingly inside.  Beginning with the rather startling front cover – an example of Victorian post-mortem photography of two sisters  - which gave Copley the idea for the book, the poems describe the imagined lives and deaths of two sisters whose identity is unknown.  They are facing away from the camera. Although to a modern sensibility this idea seems a bit gruesome, it has to be remembered that in Victorian times photography was in its infancy and -  unless you were wealthy enough to sit for portraits  -  although expensive this was a method of image recording that was at least within reach.

UA Fanthorpe has described these poems on the book jacket as “urgent … visceral… not for the faint hearted”. There’s no arguing with that.

The work is in two sections. The first deals with imagined lives of the two unknown sisters,  including a veiled toxic relationship with the father. The book unearths (sometimes literally – ‘There’s a Graveyard Near the Sea’) the prohibited degrees of kinship and incest. But there are quiet moments of consolation as in ‘Heart (s)’

She and her sister prefer stories

of exploration in foreign climes,

Is it my imagination or are sibling relationships less mined as a source of poetic endeavour than romantic or parental relationships? It seems many more works exist about mothers, fathers, lovers, widows, and widowers than brothers and sisters.  This theme is unusual and the treatment of it more so.

◄ Behind the scenes at the Poetry Library