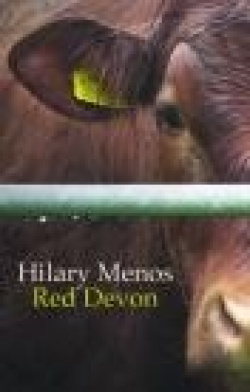 Red Devon, Hilary Menos’ second collection, is a book about farming: about mud, manure and long dead hours spent ploughing; about thistles, slurry and dead sheep rotting in the yard. Inspired by Menos’ decade spent running a 100-acre organic dairy farm in Devon these poems pull no punches: no rural idyll this but rather a brutal, dirty reality. Born in Luton in 1964 and educated at Wadham college, Oxford, Menos worked as a food journalist and restaurant critic in London before moving to Devon in 1997. She is already a poet of pedigree - her first collection, Berg, won the Forward prize for best first collection in 2010 and her pamphlets have picked up Poetry Business and Templar awards.

The majority of the 45-odd poems in Red Devon are distinctly poems of place: due perhaps to her direct experience of farm life Menos rejects euphemism and puts the whole farmyard in her work. “I feel I’m not being euphemistic enough/ when I explain the absence of four or five lambs/ by saying we ate them”, she writes in ‘Stock Take’. But as this quote shows Menos does more than merely evoke the farmyard, she also addresses environmental concerns and makes her reader think about what and how we eat nowadays.

Yet these poems are poems of the everyday, they do not mythologise farming or employ elevated language. One poem, ‘Tercio de Muerte’, specifically rules out such tactics (although of course this device allows them in by the back door), “Blokes in this business,” the poet says, “would write Grunt as Theseus./ Godlike”. Instead he is found “huddled/at the foot of the shed wall, flail chest, not a moan.” The poems in this first section, ‘The Ballad of Grunt Garvey and Jo Tucker’, evoke the sheer physical grind of farming: the reader is with Grunt when “Mud spatters his face” and later, “a mud-reamed trogolodyte”, he “sits down with a ‘Value’ pizza in front of Countryfile.” This is a moving sequence partly because of the depth of Menos’ chronicling, because the brutality and menace underlying her poems come together in the fate of Grunt.

In the second section, ‘Shambles’, Menos allows her focus to widen, encompassing environmental concerns as well as problems faced by farmers globally. Some of these poems are effective: ‘Pigweed’ in particular evokes environmental disaster too well to allow the reader any false comfort, while ‘Pig Out’ is a grotesque riff on steroid use in animals. The black humour of pig as bodybuilder is appallingly funny - “Yeah you bet I had hypertension, the pressure/ to be bigger, pinker, leaner” - and throughout this collection Menos employs humour very effectively.  However, other poems in this section face the problem any poet of conviction will recognise: how to get your point across without sounding as if you are preaching. In this case the epigraphs to, for example, ‘Red Tide’ and ‘Pieta’ (“In Paraguay toxic pesticides on GM soy affects the health of people living nearby. Women living within 1km of sprayed fields are twice as likely to have a child with deformities.”) mean the poems begin to tip over into propaganda.

This is a neat collection of poems, in contrast to the dirty physicality of their content, with not a word out of place: every sentence is syntactically correct. Menos employs even forms of three- or four-line stanzas with mid-length lines although poems in the latter section, which are more personal, vary. There are also a few sonnets scattered throughout. And although Menos has eschewed conscious “poeticism” these poems display a mastery of alliteration and assonance: they are poems you can really feel in your mouth and evoke the farmyard in all its blood, bone and sinew. So in ‘A Load of Old Bull’… “Head low,/ the bull shoulders out of the slant shadow” and in ‘Grunt’s Bane’ … “stonechats crack pebbles in the hedge” and thistles “crowding the shaled edge of the old quarry/sharper than hoof picks, tougher than baler twine”.

Menos’ power resides in the concrete image, in her acute observations. Elsewhere she has spoken of her dislike of the “self-consciously poetic” and these poems remain determinedly straightforward in their diction. This can be powerful in evoking a sense of everyday farming life but some of the poems are rather flat and, perhaps, could do with a bit more poeticism to set them alight. Despite this caveat, in reading and rereading this collection I was struck by how lucky we are to have found in Menos that rare combination of talents and interests: a poet farmer. Combining poetry with working the land has something of a history (think Robert Burns and John Clare) but more recently poets writing about nature have a less intimate relationship with the land. Menos, in comparison, offers a unique window onto the agriculture which sustains us. Cato Pedder

It seems these poems are aiming to show the reality behind the romantic and pastoral notions that some of us (or me at least) still harbour about country life. I married into a farming family but its easy to forget how relatively comfortable urban existence can sometimes be. Thanks for a great review Cato.