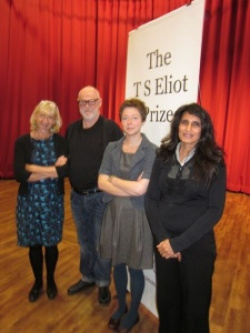 This was a feast of poetry at Oldham library, and part of a tour celebrating the 20th anniversary of the TS Eliot prize that is taking 36 nominated and/or winning poets on a 10-date sashay across the country. Three leading poets perform at each venue with a local poet making up a quartet. The celebration will end with a grand show at the Festival Hall in London and the announcement of this year’s winner.

Oldham library’s performance space was a fine setting for adopted Mancunian Shamshad Khan, perhaps better known for her mixed presentations with music. Her soft, lilting, ghostly delivery brought a magical element to some serious topics such how we differentiate between “needless” plastic surgery and reconstructive procedures in ‘Body Clothes’.

‘Hard Cut’, ‘Body of Flowers’ (delicious matching of flowers with parts of the body) and ‘If I Could Live Anywhere’ were tender, touching and vibrant poems and I predict many of the audience will look out for her in other settings, perhaps with music. Khan spends a lot of time in workshops encouraging other poets – she must be an inspiring teacher and collaborator.

Jane Draycott brought humour, warmth and fizz with her sharply observant work including ‘Pass’ (the agonies of watching a new driver heading off solo for the first time) and ‘Golf’ (those dreary, sterile, synthetic golf courses).

Draycott has a lovely feel for mood as in ‘The Stare’ and ‘The Namesake’ and prescient views of ageing in ‘Prospect’. Her loving homage to her mum’s set of encyclopaedias in ‘Italy To Lord’ was both touching and sharp. She also read an extract from her translation of the Middle English elegy Pearl which sent the audience scurrying for copies from the bookstall.

Bright, intense and warm Jen Hadfield, a former TS Eliot prize winner,  was as fascinating for her introductions to her poems as she was for the words themselves. Her love of her adopted home of Shetland was evident and she described a busy, happy buzzing place, not the dreary, weather-battered wasteland us southern softies often imagine.

‘Hydra’, ‘The Thin Places’, ‘The Cat’, ‘The Parents’ (a new poem that she read nervously as her mum was in the audience) and the delightful ‘The Plinky’ Boat were enchanting and enthralling. Her earlier work Nigh-No-Place, for which she on the TS Eliot prize,  displays the eerie, almost romantic tone and texture she has mastered so well.

Leeds/London/Irish writer Ian Duhig is a master of storytelling leavened with wit, humour and dark observation. ‘Goths’,‘Charivari’, ‘Roisin Ban’ and ‘Via Negativa’ were superb. ‘My Grandfather’s Seed-Fiddle’ was touching and loving. Duhig has worked in homeless hostels and drug addiction centres, and his warmth for his fellow humans is well portrayed. But he finds humour in the darkest tales, such as when he was reading a poem about an infamous case of a black man hounded to his death by police to an audience he realised was hard-core BNP. A fitting end to a fine evening.

The Arts Council-funded tour will visit a wide range of venues all over the country. Remaining dates and their poets are:

Poet accused of plagiarism pulls out of Forward shortlist ► 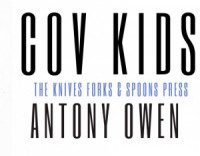 Congratulations to the Poetry Book Society for organising this commendable tour, and to the Arts Council for backing it. Sounds like it was a very good night at Oldham.