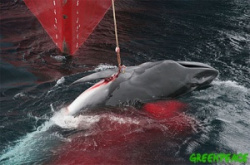 Dim are the depths and deep are the dives

As he glides on his solitary way

Through forests of fronze and rainbowed reefs

Round rocks where the guillemots play

And out to the oceans embrace

He follows the path that his ancestors took

The last of his line and his race.

Is ancestral memory absorbed from the past

Of whalers who slaughtered his kin?

Does he see as he cruises the vast lonely waste

The sun bleached bones of his kind?

The carcasses rotted and scavenger stripped

The fate of his race sealed and signed?

You may hear him sometimes as he journeys alone

And sings to the set of the sun

For the saddest of sounds is the song of the whale

As he calls to his brothers long gone.

◄ I Am Ill

PS. Still learning to WOL. I see this won the hertz thingie. So it should!

HI Cate. I see your visits are rare, but thanks for nice words a few years back that I left hanging. (I wasn't giving her madge pleasure - honest. Your poem rich. Both warm and chilling.
you got it right.

So solemn and sad...

Beautifully crafted Cate - I love the use you have made of assonance and alliteration.

I also love the way you have taken the theme and applied it to the plight of whales in general - taking that leap into the future, where one day there might just be one lonely whale...