Truth often comes in drag - as a paradox 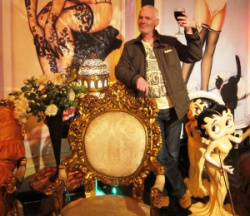 By 5.45pm on a bitterly-cold day recently, following a call to the car mechanic, I'd had enough. Nothing was going right. Not the three new poems I was working on.  Not my car. Nothing.

New furry hat on (thanks, Oonagh) then up the hill I went to the MASSIVE Ss Peter and Paul Church, New Brighton, Wirral (well, if you're gonna do 'Church Triumphant' you might as well do it New Brighton-style).

Six o'clock and I'm on my knees at the shrine of St Philomena the Wonder Worker - in there saying the special words provided and inserting my 'intentions' at the relevant points. She was an early martyr of the Church, and my mum in Wigan carries her name. Powerful stuff indeed, whichever way you cut it.

Philomena is a great intercessor with God. You either get that or you don't. Most 'reformed' (non-Catholic) Christians don't. But then their forefathers didn't 'get' how Satan messed with Luther's head - and theirs.

At 6.30pm I'm down the hill to the bar I helped name ... Tallulah's. A large red and then I sit on a huge golden throne (remember this: nothing in New Brighton is normal).

Sometimes you need to sit on a golden throne to see the world in its humility. Truth often comes in drag as a paradox. It's like war - often you must take up arms and fight if lasting peace and justice are to be established.

So I sip wine, and a man - also called Stephen (after the Protomartyr, 'a man full of God's grace and power') - comes to my table and talks to me. He's a security guard at a store in Liverpool, and something of an expert at spotting 'bagheads'.

We talk of love affairs - particularly the ones that flounder but refuse to wither away - and the struggle to be human through these difficult times. It's a nice interlude. I like it when strangers come up to me and spill. It's something that happens quite often.

As we talk some great 1980s music is playing - Go West, Spandau, and Sheena Easton, then Terry Hall's soulful vocals for - what was it called? - 'Ghost Town' by The Specials. It takes me back to my time in Norwich (happy days), where I'll be going for a reunion weekend soon.

But then I suddenly also recall the video for 'Ghost Town' which I think featured the band driving through the Blackwall Tunnel in East London. I'm transported to the many times I drove through that tunnel, journeying between my job as news editor of the Kentish Times in Gravesend and my flat at the Angel Islington.

And at this point the TV is showing many scenes of London - some sort of railway journeys programme fronted by Michael Portillo, who seems very good as a presenter, I must say,

So now I'm thinking of Philomena, and those problems that I laid before her, and I'm wondering whether this emphasis of London and Norwich is some sort of early sign or omen from the saint.

Next, The Proclaimers are belting out on the sound system, and I'm reminded of Scotland where I had such a good time as a journalist in the '90s and made brilliant friends who I see to this day.

Finally, up to me in the bar comes a young man who I know vaguely from around the local manor, and he's spouting poetry at me, Browning, I think. It's all so lovely ... this experience. I can feel Philomena's wonder kicking in benevolently, step by steady step.

I'm being shown what joys and riches my life so far has contained, and I'm being reminded of how good and warm people can be.

At about 9pm I get up to go home. As I leave the bar there's a woman outside the entrance, smoking. She flashes me a big smile, fixes me with a look of affection, and says 'bye love'. It this simply the natural warmth of Merseyside people - or is it Philomena sending me more signs?

◄ Such misery - in Goole, Hull and Wigan

Then the muse of good mood arrived ... ►

Cheers for the comment, Harry. Yes it was just a strange period of stress I had, followed by sequences of epiphany, so I thoguyht I'd blog it here. You know what we bred-in-the-bone Catholics are like!

I don't put my poems up here any more. Just oocasional colour-written prose like the above posting.

I see you have a Liverpool and literary background, so do you fancy coming to read / perform with our group, The Liver Bards, at the Ship and Mitre (upstairs room), Dale Street, on third Mondays of each month? Next meetings are on Monday 18 Feb and Monday 18 March. There is no meeting in April though; instead we have a special Monday 6 May Liver Bards at the Ship and Mitre, as part of the Liverpool Literary Festival.

Our New Brighton-based group is at the Magazine pub on second Mondays every month.

Both clubs start at 8pm. Both are open floor, where every poet gets to read twice in two five-minute slots.

I like this Steve. (my own mother enlisted me with the `Little flower` contingent)

They fetched one of her relics over last year and you couldn`t get into Liverpool Cathederal for the crowd.

These mothers knew something we didn`t know.