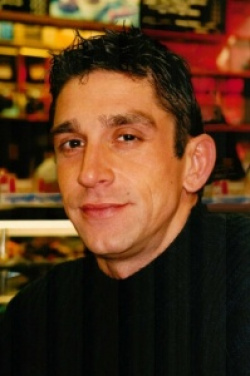 Richard Blanco has made US history by becoming the first Hispanic, openly gay and also the youngest poet to read at a US presidential inauguration. Blanco, 44, delivered his poem One Today at the second-term inauguration of President Barack Obama. The poem refers to the recent US school killings in Connecticut and "the impossible vocabulary of sorrow", and also to the hard work of the poet's own father and mother in cutting sugarcane and ringing-up groceries "so my brother and I could have books and shoes".  Blanco, who grew up in Miami as the child of Cuban exiles, was following in the footsteps of Robert Frost, who was selected by President Kennedy when he started the tradition in 1961, and Maya Angelou, who was chosen by Bill Clinton in 1993. You can read Blanco’s poem here, and about previous inaugural poems here

Write Out Loud at Sale tonight ►

Walt Whitman has nothing to fear! lol

Highlights include his rain and footstep moments, but the moon imagery was particulaly poor. A silent drum tapping...oh sure (jeez).

Very faux-aspiration/inspiration though and I'm sure many enjoy that. As ridiculous a look at America as Wordsworth's view of London via Westminster bridge.

It's most apt for any politician gaining office. Even if it is the politician I would choose if American.

Neither Wordsworth nor this guy can smell the shit or the reality.

Go on youtube and type in 'leaves of grass' and click on the third link down - Walt Whitman. I would just add the link but the site has issues with ipad links.

Enjoyed reading this, but more so listening to it. He reads with great conviction and clarity and excellent pacing. I guess it's essentially a list poem (or "pome" as he pronounces it) and eminently suited for the occasion.

Really enjoyed the poem. It could have become a bit oversentimental but just managed to steer away from that. I liked the imagery in it - the roofline/story connection stays in mind, also the dreadful implications of the children marked forever absence. It does bring a lump to the throat.

Meanwhile, I'm sure I'm not the only woman wondering why he has to be gay! Sorry for that superficial comment - couldn't help it :)

What a wonderful, touching poem, weaving the universal with the personal, the topical with the timeless. Greg, well done getting this up. I hope we can get lots of folks reading/listening to it.
Now, Mr O, time for action.

A truly heartfelt poem that everyone can relate to in some way.
And what a deeply profound line too - 'the impossible vocabulary of sorrow' ...