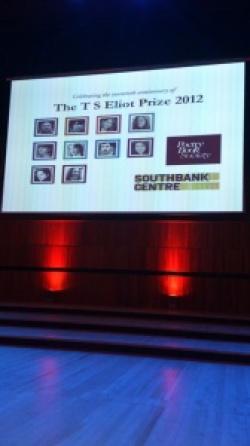 American poet Sharon Olds has won the £15,000 TS Eliot prize for her collection Stag’s Leap – poems of loss, mourning, and healing that deal with the end of her long marriage. The judging panel of poet laureate Carol Ann Duffy, Irish poet Michael Longley, and David Morley, professor of writing at Warwick University, were unanimous in their choice, announced at the Haberdashers Hall in London. Duffy said: “This was the book of her career. There is a grace and chivalry in her grief that marks her out as being a world-class poet. I always say that  poetry is the music of being human, and in this book she is really singing. Her journey from grief to healing is so beautifully executed.” The TS Eliot prize was inaugurated in 1993 to celebrate the Poetry Book Society’s 40th birthday, and was celebrating its 20th anniversary with the 2012 prize. The prize money and shortlisted poets’ £1,000 cheques had been donated by Eliot’s widow Valerie, who died late last year, and will continue to be given by the TS Eliot trustees. The prize is also supported by Aurum, a private investment management firm.

◄ Countdown to TS Eliot prize: how the contenders performed