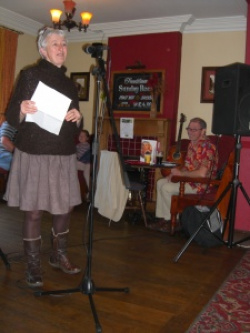 Let me put my cards on the table, as a southerner who is in love with the north. It was the first time I had visited Marsden, and I’m afraid to say that as a result I no longer consider Hebden Bridge to be the centre of the universe. I found the views from the ridges along the road from the M1 to Marsden via the Last of the Summer Wine country around Holmfirth often breathtaking. Steadfast in my sense of direction I refused to be diverted by the intriguing signpost to Netherthong. And when I dropped down into Marsden itself late on Saturday afternoon it was heaving with jazz festivalgoers, bonhomie and beer. We went out later that night for one or two drinks and had a literally smashing time.

But enough of this travelogue. I was there for the Write Out Loud poetry jam, a crucial part of the jazz festival, bright and early at 11am on Sunday morning at Marsden’s Railway Inn, a staging post on the now-notorious trans-Pennine Rail Ale Trail. Luckily we poets were not troubled by stag or hen nighters, and were instead only joined by touring cyclists, who were not in the same dissipated league.

Julian Jordon, among his many other talents, is a very experienced open mic compere: great off-the-cuff humour, exuberant, encouraging, and expounding the ethos of Write Out Loud at every opportunity, which is basically that anyone can get up and give a poem or two – and everyone has a poem or two in them. The morning and afternoon were full of moments that shouldn’t have come as surprises. Self-effacing Jean Bennett from Holmfirth delivered a briskly unsentimental and effective verdict on Diana and the royals; Theo Ayres, a regular at Marsden Write Out Loud nights, turned out to have been commended in the recent crop of Foyles Young Poets of the Year.

A bloke who referred to himself as Joe Pleb appeared to have hiked in; after delivering his poems about food waste and recycling he later set forth with his rucksack, presumably on to the next poetry reading. Felix Owusu-Kwarteng fiercely spread the word about hospital bugs. Kirklees Libraries’ Diane Green delivered a charming poem about Huddersfield’s station railway cat.

And a few Write Out Loud stalwarts need to be mentioned, too. Joy France gave us her powerful and moving poem about a mother’s love; Isobel a thought-provoking poem about family and labour history. Steve Mellor’s two hilarious efforts, a wide-ranging lavatorial conversation with David Cameron and a terse summary of a life story, in which two of the key words were libation and masturbation, were very well-received; David Andrew delivered cherished and crafted poems from his omnibus collection, So Far; and Dave Morgan reminded us of the poetry jam’s musical connections with poems about John Lennon and the prose-poet of Beat and jazz, Jack Kerouac. I’m neither a regular nor very comfortable open mic performer, but nowhere have I found an atmosphere as welcoming, attentive and appreciative as at the Railway Inn.

Julian, who had earlier performed some Spike Milligan verses with his six-year-old granddaughter Niamh, rounded things off with his crowd-rousing story of rhubarb imprisoned in the West Yorkshire Triangle. The session, booked for two hours, overran by 30 minutes. Next year I’ll be back for the full jazz weekend - with maybe enough time to track down the nearby local mysteries of Netherthong, and Upperthong as well.

Write Out Loud at Bolton tonight ►

Thank you all for the comments. photos here: http://www.writeoutloud.net/public/galleries.php?&message=#_gallerydate2012-10_gallerytag_gallerypage1

A really enjoyable event with a diverse range of readers all rising to the occasion. Standing room only and a bar open at 11am. Thanks to Julian and Diane for making it happen.

Likewise, Isobel. And meeting your lovely, lively girls was a treat, too. Thanks to all the poets and the audience at the Railway Inn.

The thought of you tracking down either thong is quite an amusing one Greg :)

Lovely to have met you at last - and all those WOL regulars. It was a glorious day, made special by our welcoming host Julian and the wonderful weather. You really can't beat this country when the sun shines and there is jazz music in the air. It's pure poetry :)

For the third year, a terrific lunchtime. The mix of styles is what makes it, I suppose.
Well worth making a note in next years diary for those who didn't make it this time