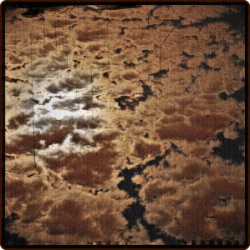 Just so you know, I've secretly been watching your stories.
I wait till your asleep,
fully asleep,
I check.
It is then that my research begins.
Late at night with a pair of head phones and a flickering TV
...... I've come to some conclusions.
Developing super powers may.... be…. difficult.
I've been trying.
I'm real good at it,
trying that is.
I thought that I’d surprise you.
You'd come home from work, and I....... would be invisible
only to reappear again,
but, apparently, it's much harder than I thought.
So recently I started staring.
Just staring, for hours at one spot until something moves.
Even if you've never seen it before,
I swear it moved.
Really,I’m getting better.
Or should I say,
Stronger?
When your not home, I create experiments in our bathroom sink
with all the old perfumes that my grandmother sent me.
Hundreds of Avon this and Avon that.
I've been saving up for 24 yrs now.
Waiting for just the right moment to unleash a toxic waste of supernatural abilities, billowing, in clouds of unnatural colored gasses.
Swirling wildly from the depths of a flaking porcelain basin,
which now, flakes just a wee bit more.
I've intoxicated myself until I have lost the will to hold back
from an ever growing lust to paint everything I own, including the toilet brush,
what I think to be a sea green.
Coming down from the fumes,
I've decided this idea may not be to my benefit.
All this superhero stuff got me thinking,
I'm going to be a better person, a heroin of sorts.
I'm sure of it!
With lightning blot eyes and the ability to hover,
I'll save kittens and rebuild New Orleans single handedly.
Maybe, it's just doubt holding me back from achieving my natural
supernatural abilities?
I've decided, I'm going to take all my bad influences out for some drinks.
Later I'll wrap them up in an old pillowcase and beat them softly and thoroughly with a hammer.
I assure you, they will never hold me back again.
When my powers get strong enough,
I will to be braver and ride the train,
I'll  to throw caution to the wind,
I'll to forget my past and all her all the sycophants.
I'll write silliness across the sky
until finally, I can sing.

◄ A Ribbon Cut As Red As my Heart

Another cracking piece of writing. I think you are writing up mania really very well. I love that reassurance of 'really, I'm getting better'

this is a classic mate i think
all and every bit