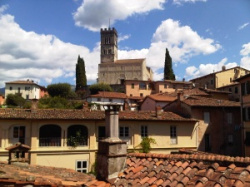 The worst of the front was that trickle of rain

down the neck. Wet through, it felt like liberation.

And lice. Home on leave, people shunned him in trains.

Walled, hilltop village of his childhood:

as another war came, he returned to Barga.

Saw himself as immobile, a tree spreading roots.

When the Germans briefly retook his village

one self-portrait was damaged. The scar’s still there,

Unless expecting someone, he barred the front door.

Couldn’t be bothered with putting on shows,

scraped paint from canvas he had no more time for.

His rules were care, attention, and slowness.

looking not for the beautiful, but for the earnest.

Based on the published recollections of Cordati’s daughter, Bruna

Thanks very much for your comments, chaps. Will take up most of your suggestions, Ray, and ta for them, although maybe not the Barga verse. I think I'm looking for a certain awkwardness of rhythm at times. Yes, John, it's been a while.

Seems a while since you've posted Greg.
Nice imagery, particularly the last part about turning his attention from the gipsy girls to the rooftops, gutters etc.

Enjoyed the poem a lot, Greg.Nice portrait. Too many full stops for my liking, prefer more of a flow.
First verse is good, 3rd verse is very good, except I don't think you need "In bombing". I really like the gouge like a bandage.

Walled, hilltop village of his childhood:

as another war came, he returned to Barga.

Those 2 lines are begging to be swapped around! I know you'd need a rhyme for Barga.Father?

I wonder if canvasses could be singular? Helps the rhythm, I think.
In the last verse I don't think you need "just" before painted roofs.

Enjoyed this Greg. It's always good to learn something via a poem which sparks the curiosity.

Fascinating. And well written. Got me googling and opened up a new world. Thank you.