Attila the Stockbroker cleans up the City!

by Attila the Stockbroker 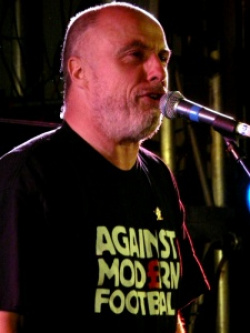 ATTILA THE STOCKBROKER CLEANS UP THE CITY

I was a clerk there: I’ve seen the greed
How wealth and power eat hope and need
Now they’re eating each other but they’re still screaming
‘No interference’ – I start dreaming…
‘Self regulation?’ OK, I say
‘I’m a stockbroker – let’s do it my way’
And that’s the beginning of this little ditty:
Attila the Stockbroker cleans up the City!

Each gets a red nose so everybody knows
Just who they are and where all our money goes
No more speculate, no more accumulate -
This is a lifestyle we’re going to eradicate
Dealers on the floor meet squads of the poor saying
‘Here’s the twist, Oliver – we want more
Work for us or we take the whole kitty’
Attila the Stockbroker cleans up the City!

‘Hello Mr. Hedge Fund, have a cup of tea.
Financial Services Authority? Me…..!
You’re a parasite on the population
Convicted of criminal speculation
Time to atone for a life so greedy -
Twenty years working for the poor and needy.
Want to appeal? Try the Central Committee…’
Attila the Stockbroker cleans up the City!

Morning Mr Banker,  you’re in for a shock.
We’re taking much more than just Northern Rock!
All the banks nationalised – Stock Exchange too.
Utilities, railways, grabbed from the few.
Mr Billionaire? You just lost your money.
(Hey there, Chelsea fan, isn’t that funny!)
The future’s brown. The future’s shitty.
So Attila the Stockbroker cleans up the City!


Capitalism is a John Cleese parrot.
Let’s give it stick and not a single carrot!
Bollocks to the dealer, the broker, the lender -
Social justice back on the agenda
No Stalin stylin’ going on here
Just Smoked Mammon sarnies and really good beer
For the poor no fear, for the rich no pity
When Attila the Stockbroker cleans up the City!

Couldn't make your Mcr gig but was great to meet you at the Shay in Halifax. Just started reading your book, been busy writing and performing! Hope you have chance to have a gander at some of my work.

give me a call when you are handing out the hoses and lets wash all this scum off the street.
nice one.

Your fourth stanza's an absolute blinder. Love it

The sentiments in this poem totally appeal to my personal politics. In a more balanced world we'd have more of this point of view (given that we've only recently had to endure party conference after party conference).

It's a sharp, insightful, funny and punchy poem. It's cracking stuff.