Akram and the Tank 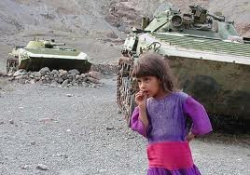 The Soviet BMD-1 growled to a halt in front of Akram, scattering his long-haired goats.  The tank commander shouted.  Akram shrugged his incomprehension but recognised the word “Mujihadeen”.  Akram was a goatherd of around 11 years of age.

Three infantrymen emerged from the rear of the tank, spaced themselves out and trained their weapons upon him.  Two stood back while the third searched him.  Satisfied, they shot one of his goats, hefted it into the tank, re-embarked and the BMD-1 edged away.

Akram felt underneath his largest goat and took out the concealed rocket launcher.

I an' I, an' t'ing [in-a Babylon]
this is neat-o. If I can find the address of the short story-writing comp. I saw recently, you ought to send this in.
RPGs all round and make mine a tequila slammer. Hotsaaaah!

Is that a surprise ending or what! Agree entirely with other comments.

unexpected and very much (is enjoyed the right word?)

As the others have said super story telling with a sadness that this senario will be an all too common event.

One hell of a lot condensed into these few words, puts the knife in.
(and next time I stop at the side of the road and throw a roadkill deer into the truck I will be thinking of Akram and the world we have given him to live in)

Well now...how's this for a change in direction? A neat and deadly "cameo" of
the sadness and horror of a conflict that has
rumbled on for generations. The last line is
a killer...so to speak!