The thrill of it all: a big night out with the Best of Manchester Poets 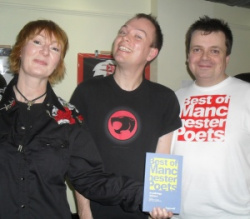 Having never been to a book launch before, I wasn’t sure what to expect.  All I knew was that I was really excited about attending and reading, but most of all, utterly thrilled that the editors thought one of my poems good enough to be included in the book, as it seems to me that the Best of Manchester Poets, published by Puppywolf, carries a certain amount of kudos. Write Out Loud members are well-represented in volume 2 of the anthology, with at least 21 names that I recognise – there may well be more.

It feels quite bizarre actually – I only started writing poetry in September 2010, and here I am, a published poet already!  I try to be all nonchalant and cool about it, like this is just an everyday thing to happen to me, but the fact is I’m like a kid on too much sherbert and have told absolutely everyone I know, twice.

The brilliant performance poet and compere Dominic Berry, pictured, centre, was the host with the most at the Eighth Day Cafe on Oxford Road.  The café offers a wonderful range of vegan and vegetarian food, and also holds regular music nights, art exhibitions, and other events.  The venue was packed to the rafters with standing room only, the room buzzing with anticipation, and the timing for the event impeccable.  Dominic kept an extremely tight schedule, managing to fit 40 performances into two hours, which was no mean feat.  I don’t have the space to list all those included in the book, but if you buy a copy you can see for yourself.  These were the poets who were able to read on the night:

At least one of the poets there, Brian Jones, was not only being published for the first time, but it was also his debut poetry performance. What a night to pick for your first time - and a great performance to boot.  Brian is studying with the Open University, and his poem, Valium Skies, was written for an assignment. He submitted it to Puppywolf not daring to believe it would be accepted, and was amazed and delighted to find out it had been included. We both agree that BoMP will make the perfect Christmas gift for friends and family!

The book’s publishers Puppywolf are an independent company owned and run by Keir Thomas, pictured, right.  Keir loves Manchester, and believes the city is “fast becoming the creative engine of the country”. The editorial team, including Keir, read through over 500 poems whilst maintaining a strict critical focus, and all on a voluntary basis.  He said he had only recently realised that “Best of Manchester Poets is one of the biggest community arts projects in Manchester, if not the north-west. That caught me by surprise. We started it simply because we thought it would be useful, and to celebrate the Manchester poetry scene, which we reckon is unique.”

Puppywolf intend to publish BoMP every year, which is good news for us poets.  Submissions for volume 3 will be invited around the middle of 2012, with a similar publication date to this year.  They have already published two individual poetry collections by Manchester indie favourites Cathy Bryant and Angela Smith.  Keir is passionate about pushing against what he refers to as the “blokeish culture” which he believes can be a big part of the poetry scene.  You should come to Wigan, Keir – it is a hotbed of female creativity; we have so many talented female poets on the scene.

I was interested in whether Puppywolf receive funding or donations, or whether it is an entirely self-financed concern, and discovered that it could not exist without voluntary input, and the love of lots of people.  Although he pays for the printing, Keir believes that it will never make any money.  This brought it home to me how dedicated Keir and his team must be to invest such a huge effort in putting our “home-grown” poetry out there on the streets and the bookshelves.  How many books of poetry did you buy lately?  Me?  None until now, which made me feel a little ashamed.  We all want to be published, otherwise we wouldn’t submit our work to the likes of Puppywolf, but how many of us have gone to the bother of buying new poetry books by small publishers? Perhaps we need to put our money where our mouths and pens are, and try and support the small poetry publishers a little more, in whatever way we can.  If anyone has any suggestions or advice on funding or donations for Puppywolf, Write Out Loud or any of the other hugely important resources out there, do please get in touch with Keir at enquiries@puppywolf.co.uk, or the team at WOL at info@writeoutloud.net.

Until 31 December 2011 WOL readers can buy BoMP2 from Puppywolf for just £8.99, including free p&p. The rrp is £9.99. For overseas orders, please email Keir at the email address above and he will be happy to give you a price.

I totally enjoyed my first book launch (yes, I am hoping for more!).  Such a massive buzz, being amongst all that talent, knowing that I share pages with them. I would like to extend my thanks and admiration to Keir and his editors, on behalf of all the writers who submitted their work, and to all the poets who entertained us with their funny, moving, poignant, and lyrical words.

Well done Laura, been great seeing your rise to Stardom! Nice review too, sounds like a great night and Dominic did fine job! Couldn't come as I had my last regular Guitar n Verse, not great timing but I've always done first thurs of month (new plans for 2012)!

Anyway, well done on getting in the book (and everyone else, some great writers a lot of who I know of course), I did enter, was unsuccessful but will no doubt have a bat next time, all the best see ya soon Jeff X

Hi Laura,
Brilliant review of what sounds like a really enjoyable evening! Well done to everyone as well!! I totally agree with you regarding the need to buy poetry by small publishers. We want everyone to read ours,don't we?,so we should do the same.(I've recently started building up a collection of poetry books myself,and will get "Best of" asap!)
Jonboy x

Thanks for raising this, Win. "Keir tells me that because the gig was over-subscribed, there will be a second night taking place early in 2012 – he will reveal details as soon as he can." Owing to an editing error, this was omitted from Laura's published piece.

Well done with the review, Laura sounds like a magic night. There has been some talk of a BOMP launch pt 2 for all those who couldn't read on the night, anyone know anything about that? Win

nice one laura, give us some of that sherbert :)

Aw Cathy, it was an absolute pleasure - I'm not surprised you got so emotional! Thanks again for all your hard work - we really all do appreciate it :)

Looking forward to the photies Joy!

Yes it was a cracking evening. Some photos going in the galleries over this week. (My camera broke and I had to resort to my backup point & shoot - anyone know of a decent camera for sale cheap?)

So although I got pictures of everyone, the quality doesn't do the event justice. If yours doesn't appear I can email you a copy if you message me.

Thanks for that lovely review Laura! Speaking as one of the editors, I'm very proud to have been part of the team. I read each poem (all anonymously - we're about poetry, not reputations) three times, and it was such a pleasure. Keir spends *months* editing, doing layout and sorting out the printing etc, and then he and I proofread it. The book is gorgeous and gives me tingles down my spine, but launch night is what makes the work worth it. Meeting the people behind the poems is very special. I got so emotional in the end that I had a good cry - Stevie Turner says that my 'glitter-stained tears are a future poem in themselves'! So happy. Thanks so much for coming and being part of it too. I'll never forget it.

Well reported, Laura. I enjoyed the whole evening... a mix of oratorical and written styles.

My favourite readers of the night - a draw between Cynthia Buell Thomas's sensuous 'Lines on Picasso's The Aperitif' and Harry Matthews' 'According to John'.

I liked the very cheery MC-ing by Dominic Berry.

It was with relief that Rachel McGladdery and I discovered that the venue was licensed!Sometimes veggie venues aren't licensed but this was - and we sure as hell made the most of its red wine supplies.

Top night! And before arriving we had din-dins in Manchester's best restaurant, Cicchetti's, King St West, where a fellow diner was ROBERTO MANCINI.

As Rachel and I tottered out of the restuarant, heading for the launch venue, we also spotted that cockney actress MICHELLE COLLINS, who now plays the landlady of the Rovers Return. Then to complete the celebrity count we bantered with DARREN THOMAS - the engimatic presence from the riotous Tudor Wigan poetry night.

Darren long ago had the good sense to bin off his native Bolton for the good life in Wigan (when he is not travelling the world, that is).

Lastly, I want to say I appreciate the hard work and efficiency of KEIR THOMAS and his editorial team in producing this book. Go buy folks!

I'm looking forward to reading all the poems in the book - when I'm sober, which will probably be sometime early in January. I will then announce my overall favourite. And no it won't be my own 'The Finished Sentence of Love' ... page 156 if anyone's interested!

Hey, cheers ladies - I had a ball, and really enjoyed writing the piece. Was a great night :)

Fantastic review, Laura! You covered it all so well - so happy for you and the other poets published in this volume!

Great review Laura. Am glad you pointed Dominic out - I would never have recognised him with his clothes on!

It sounds like you all had a lovely time - I will definitely make an effort to be at the next one :)