Anish and the Moon 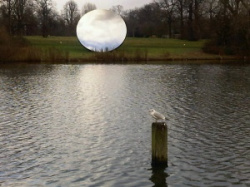 There was a stone in the lake

And the moon in my hand

There was a stone in my hand

And the moon in the lake

I threw the stone and it became the moon

as it solidified in the water's space

Its mirror a world of twisting creatures,

all skin and fin; water bodies

I threw the moon and it became a stone

as real as touch, its presence vacuous

The miracle is not the clear skin of my eyes

but the point at which clouds cross my sight

I see the shapes of my mind sail past

This box of a world, translucent with fact

with lies, with the truth of a lie that makes you think twice

◄ As you sleep

Stirred the 6th this Monday ►

Blown away by this poem. Very, very strong writing. It has that wonderful feeling that what you are talking about is somewhow just under the surface of your words, not hidden exactly but not yet fully revealed, making the reader work.

Wow - unusual - I love the juxtaposition between moon and stone. The 'twisting creatures', the 'pitted rough hewn chunk'...SO evocative...can feel it in my mental hand, can see the creatures squirming. 'translucent with fact, with lies' - some fantastic lines in this

Have got rid of the oxymoron, 97% and barely there, have moved translucent into where interspliced once was. Thank you for the help in redrafting it, and the encouragement :).

Enjoyed this tremendously Rebecca. You must try and change 97% and interspliced, they don't fit into what is a lovely almost ethereal piece of work.

If you have translucent you don't need ''barely there'' thats over egging the pudding. Solid yet vacuous is an oxymoron I would recommend examing it or altering its some way ''seemed solid yet vacuous'' or something along those lines. I really like the rest of this those were just the two things I'd recommend looking at in future drafts.

Thanks Marianne, I've written a few based on my feelings about Anish Kapoor's sculptures, this is one. It sounds like you feel slightly how I felt looking at his stuff, which makes me happy.

I really enjoyed this, particularly the agitation in the lines that change the roles of the stone and moon, liken to the line "with lies, with the truth of a lie that makes you think twice". Identity, out of grasp, real if you can project it elsewhere - a sadness I felt when the character throws the moon for it to become a stone, solid but static almost,and stopped, without a role. A moon can contain so much movement, a stone has to be moved by another....this is becoming quite fragmented, I apologise, I like the thought spark that this piece of writing has created in me, even if a little intangible.
Thanks for posting.