Fed and Mavis On Their Travels 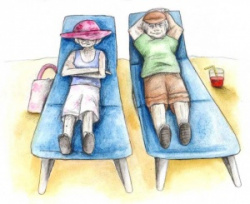 Famed for sun, sea and sand –

Mavis and Fred flew over,

Throw away beiges and blacks,

(And that were only her face),

Then they set out on sand to th’ sea

But sank and got vexed at snail’s pace.

So they returned to hotel and the poolside,

Relaxed from their moans and their groans,

Tone their muscles and strengthen their bones.

The hotel dinner was divine

And Fred wondered about taking Viagra.

He suggested an early night,

But Mavis said, “Save ‘em Euros and buy Pina Colada!”

So they drank and danced ‘til Mavis’s toes were bruised

And Fred’s hands were running with sweat,

But they moved with a rhythm and style

To waltz, samba and sixties beat.

A feast of fruit and foods they’d ne’er seen

And after they strolled the prom,

In a romantic holiday dream.

Then Mavis noticed Fred and the men

Were all heading for Murphy’s Bar,

If he ate much more he’d explode.

But Fred said it were just constipation,

And more likely his guts would implode.

And sat in ironic “The Thinker” pose

On a bench with her hat beside her,

Tourists thought she were one of t’ shows.

They dropped Euros into her hat

So she bargained with a camel- driver.

She haggled in Spanglish to hire a camel,

She reckoned the cost was about a fiver.

She swung in a basket like an Egyptian queen,

It was the transport she’d been hoping for.

They plucked Fred up and out of the bar

And headed on the sand for the shore.

So they hired a boat and set out,

Across the deep blue sea, they roamed.

Fred paddled and sweated away,

Mavis rested back with a drink and a book,

It were beautiful the way she travelled

‘Til Fred’s arthritic knee got stuck.

Alone in the great big ocean,

Drifting with a knee stuck at 90 degrees,

Mavis found some rub in the bottom of her handbag

The knee wouldn’t budge at all,

Drifting, Fred didn’t know what to do,

They could see Africa looming larger -

The rescue services were delightful

And towed them back to the Isle.

Back home Fred and Mavis said

With thanks to Grace Mutton for the pic and my mum for the audio.

This was a pleasure to read, Jane.

I have it on good authority that the FBI always go round in pairs...