Dropping the Mask by Dave Morgan 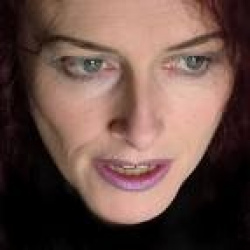 The performances of Rosie Lugosi and Chloe Poems have generally left me feeling in much the same way as young children often feel about circus clowns. Well not quite hysterical jibbering terror, but a sense of wondering if there’s a victim involved in this edgy cabaret and could it be me. Cruel intelligence and a mask coupled with material which often pushes the boundaries beyond comfortable smart ass superficial liberal cynicism, tweaks some vein of vulnerability deep inside. So going to the Dead Good Poet’s Society guest night to see Rosie Garland unwigged was going to be an interesting experience.

Clare Kirwan compered to a small but enthusiastic audience. Is Liverpool in danger of suffering from cultural overkill this year? Clare is very comfortable at the DGPS and it soon rubs off on the audience. She began both sets with a series of her own poems, such as “Blood Donor”, sometimes tenuously linked to the evening’s chief guest. Having said that “Catholic Girls” could have been performed expressly for Paul, salivating like Pavlov’s dog at the first mention of white ankle socks.

The first guest was a revelation. I’ve heard Aaron Murdoch many times. Aaron is a one-off , being in frequent contact with visitors from outer space, and acting as their Leasowe-based terrestrial PR manager and mouthpiece. His partner “Space Fish” was reduced to the minor role of holding his script which is a shame since he has introduced a new realm of surrealism into the Murdoch pantheon. Aaron’s twenty minute set was well crafted, combining “poems to make your teeth fall out” with “telepathic distress signals”. However “Thousands- like the sound of the sea washing up on the shore”, demonstrated that he is far more than an eccentric novelty act but someone who can pack a powerful political poetic punch. Aaron would have finished to a well-earned ovation but had to exit with haste. However on his return he was feted, quite rightly.

Before introducing Rosie Garland, Clare did a macabre tale about cannibalism (I think, maybe it’s just me), before paying homage to R. McGough in “My Neighbours prepare for Armageddon”. Clare’s attention to detail and meticulous choice of words, makes her work both clear and accessible. And she can be damned funny, whether ad libbing or performing.

Rosie Garland didn’t say why she’d cast aside the vampire mantle but as a seasoned performer she has assurance and authority. Some familiar themes emerged, Catholicism, Childhood, S&M, Relationships, but her paean to the Big Apple “New York Rude” was positively anthropological in its dissection of street interaction and wonderful affirmation of a culture that is “too busy going places to explain”, “that is never my servant”, a culture that is not “vengeful”, “that is sweet and sour but never bitter”. Fabulous, I loved it. Well that pandered to the geographer in me but I have to say that each of the twelve pieces presented were witty, perceptive, beautifully written and performed. “Angry Goddess Seeks Similar”, lines up the Virgin Mary with Kali and her necklace of severed heads. “Virgin Saints” eulogises St Catherine, panting to be broken on a wheel that turns to sawdust, before exclaiming “For God’s sake I‘ll do it myself”. In contrast “Permission” and “My Other Grandmother” reveal a keen observation of the ageing process, of forgetfulness, of a ”body that will not give permission for her to leave the table”, of a grandmother who “came out when her daughter wasn’t looking”, “who sang songs with words that didn’t fit”, who knew “the perfect moment to prise off a scab”. “Fledgeling” is an evocation of one of childhood’s most visceral experiences, but I’ve never heard it as a topic for a poem. “On Sunday I fly… up here I am not chicken”, twirling around in “my own Dervish galaxy”. With a nod to William Burroughs (and with a sideswipe to Queen Victoria, James Anderton, Margaret Thatcher and Mary Whitehouse) “Queer Thanksgiving” is a catalogue of all the forces of oppression and intolerance that have helped shape a queer identity, “thank you for our history…thank you for keeping us on our toes”. I could go on, “Big Women “ a homage to corsets “let me cup and saucer you”, Dummy Hand, Serial Monogamy, Drummed out of the Brownies, all worthy of a second hearing. In tribute to her vampire past Rosie finished on “Helter Skelter” anthologised in the “Very Best of SM Dykes” . “ I want to thumb your eyelids shut… I will unlace all the mouths of your body ….. tattoo what we do into your muscle”. Phew! Now I remember why I used to be so uneasy in the presence of Rosie Lugosi.

This was a great night at the Dead Good Poets Society and it’s a pity there wasn’t a bigger turnout. Apologies to all poets if I’ve misquoted them. I ‘m no better at reading my own writing than anyone else is.

Brilliant review Dave.
I nearly made it to this show, just finished work too late.

Lugosi, oh god, I melt then turn into jelly and an emotional wreck the second she speaks.

hypnotic and seductive
also something masterful, I think its the submissive thing ..........I'm off to worship the pvc clad legs of an oak table