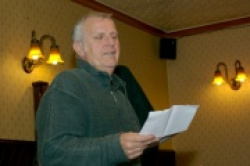 With 38 poems from 19 contributors including one featured poet, this A5 perfect-bound issue represents very good value. For those who are unfamiliar with the magazine, most poems here are ‘normal’ in terms of layout and content, though one poem uses variable fonts and another uses translation software in this issue. The 19 contributors comprise some really big hitters - 5 are editors of other poetry magazines, but more importantly, major poets, 9 are accomplished performance poets and 4 are slightly less well-known. At least 10 have featured in two or more Ugly Trees before and a couple are more or less permanent fixtures. Enough stats.

In previous issues, The Ugly Tree has published several Write Out Loud poets.It is not uniquely northern, though with some of the verse it helps if you are from round here. The magazine is special in that it claims not to discriminate between any particular forms of poetry and (from their submissions blurb)  ‘whilst we do have a penchant for the relationship of spoken & performance poetry to the page it is not necessarily our raison d’être.’

Very interesting: not all performance poetry works in a printed context in that, inter alia, reading and writing are reflective skills while speaking and listening are instant. Or so you would think. It is when you straddle these two areas that things can become different and edgy.

The vast experience of most of these poets shines through, not only in their originality of subject and treatment but also in their technical fluency. All other poets could benefit from reading these poems and noting the absence of cliché and bombast, the lack of arcane vocabulary and prolix phrases.

Of course, not everything is perfect: there are some poets where I thought that other examples of their work that I have read were more moving, more original, more finished, wittier or just plain better. But there are many poems to which I shall return many times to taste the humour or the aural flow or the killer last line and wish that I’d written them.

The featured poet is the brilliant Gerry Potter (Chloe Poems) with a most interesting introduction about his latest ventures, followed by five of the poems from his new collection ‘Chloe Poem’s Li’l Book O’Manchester’. Five gems. My favourites were Manchester and Diké 1972-2007, but they are all extremely good.

The other poems in the issue offer a wide variety of ideas and approaches: I will try not to give too much away about them and regret I don’t have the space to deal with them all here. Tony Walsh’s Too Much Poetry takes an original, ironic approach to poetry and the page. Hannah Kate’s two excellent, visceral, in your face poems contrast well with Caroline England’s three Pozzian, sfumato type pieces.

I missed the allusions in Dave Hall’s A Note From The Underground (probably through ignorance) but I could see the geek all right. Vincent Berquez’s Bombing The Plain English Society is a beautiful love poem, as good as some of his other recent work.  Arun Gaur’s two poems are very different from his Small Places which I reviewed elsewhere recently, both ending on a tangent. Always interesting to read.

I was pleased to see Dermot Glennon trying something different with translation software, though it may be a one-off device. Kate Noakes’ And She Waits is a decent, finished piece. Matt Doran’s Formal Introductions was another example of an original approach that came off.

There are three John G Hall poems here: for me the exceptional, lyrical  Once Upon An Easter Night is easily the best. Todd Swift’s Michael Kohlhaas was an unexpected ekphrastic delight, a reworking of the 19th Century von Kleist novella in splendid narrative verse. I feel that Todd’s other poem Pour l’Art ends better than it begins, moving as it does from ducking and diving to a solid punch.  Geoff Stevens’ This Is As Good As It Gets and Sarah L. Dixon’s Double Dips And Swizzel Sticks are better than most when-i-were-a-lad poetry which some magazines seem to be full of these days.

There are plenty of other good poems in this issue. I think the editor has the balance right in more than one sense. I recommend you buy it online immediately.

James is a musician, performer at Write Out Loud and writer at Bank Street Writers. His poetry can be seen in iota, Pulsar, zafusy, The Argotist, strangeminds, The Measure, Current Accounts, etc. His collection Waiting for the Cactus is on sale at Sweetens in Bolton. Other poems,reviews and comments are on his blog Out of Orbit (fjameshartnell.blogspot.com).

Thanks for your comments concerning my poetry James. I've recently signed up here so please take a look at my latest work...There's also an exhibition of my artwork if you are in London, and if you fancy coming along. Vincent

Afraid a gremlin crept in in the editing: the bit about Caroline England says in my original script 'Pozzian, sfumato type pieces', a reference to the late Italian poet Antonia Pozzi and to the sfumato painting technique. What appears in the review sounds more like an Italian footballer who's gone out for a quick fag. But it was close.