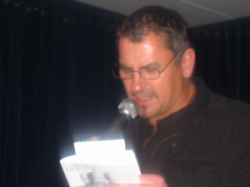 After a late start - the guy who usually does the sound had doubled booked and was rehearsing with his band so we had to wait for the cavalry to arrive though we were rolling by nine. I don’t know how this affected the mood of the comperes’ especially Darren Thomas (pictured) on his debut, though, to be fair, it didn’t seem to phase him at all.

Sandre Clays started off reading a poem of her husband John’s and later read some of her own admirable work. Listening to one poet read another’s work gives another dimension to the writers work as the reader brings their own interpretation to it and Sandre did both John’s and her own work full justice.

Paul Blackburn raised the roof with his bombastic rendition of Policeman In My Head and who could forget the line about the toaster?

Julian Jordan gave an emotional return to the stage following an illness, though his early nervousness disappeared as he got into his stride. Similarly, Janet Bamber over came her debut jitters to climb onto the stage and give an assured performance.

Dermot Glennon performed a great beat-poet type piece as well as his poem about Laura, a satire on stalking. He was followed by Tabitha Sims who gave us an alternative view with her poem which was a Dorothy Parker style, witty reflection on the dating game.

Pete Crompton’s “Empty room” was a sensitive reflection about loss. He paints a picture of a cool beautiful room but with a gothic chill. This blows through the uninhabited room and into the following stanzas. Pete also compered the second half of the gig. His skill and awareness of other poets make him an empathic compere and put the performers at ease. These breaks from the usual styles, illustrates how all the poets are developing their cannon. Although they may be recognised for their specific styles, they are all are diversifying their repertoires.

Martin Higgins returned and gave a realist slant to life, equal to his psychedelic stuff, although a complete antithesis to his usual style.

One of the rising stars of the show is regular Baz Alder. Baz arrives at the pub at around 8pm, sits at the bar and writes a poem, and then performs it at the start of the second half. Baz is mad, but he does write and perform topical, insightful poems about current affairs, on this occasion his subject was wheelie bins! His contribution is becoming an eagerly anticipated segment in the night’s proceedings.

After Darren Thomas’s acidic wit as compere we were given his poem about spaghetti hoops, shooting stars and fat bottomed girls - well one in particular. Whilst Darren brought a romantic stance to a relationship break down, John Togher didn’t. John’s style differs from most other poets as he’s a short story writer and has a surreal, yet macabre, slant to his work. His slow, burning story telling is akin to a vampiric version of Jackanory!

Overall I think this night is improving and this is due to the calibre of the regular performers; of the poets, by the poets.

I would recommend this and any of the other WOL nights to anyone so if you haven’t been to performance poetry before maybe now is the time to try it!


Louise Coulson is a creative writing graduate from the University of Bolton and she is currently the Write Out Loud co-ordinator for Wigan.

Dropping the Mask by Dave Morgan ►

Thank you for the review. The open Mic' night poetry contest sounds great! I will always miss the participation in such superb event, due to the distance and the location where I am. The only thing that I can say it is that you are all fabulous poets and have done great performances. Thank you once again.