Bolton calling! Jeff Dawson recites poem on radio in support of town down on its luck 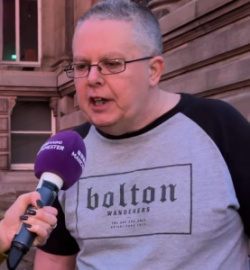 Bolton poet Jeff Dawson was featured this week on a BBC Radio Manchester programme about his home town, which has missed out on the government’s ‘levelling up’ grants, despite making a bid for millions to help revive its shopping centre. The programme was broadcast live from Bolton, and looked the town’s problems, including the closure of its Marks and Spencer store. On the programme, fronted by Anna Jameson, Jeff recited his poem ‘Bolton Calling’, in praise of his town, which includes these lines:

We could be a city

Now we’ve got a university!

With more than 200,000 inhabitants, Bolton is one of the largest towns in the UK. Write Out Loud has a special attachment to Bolton - we started out from there. And Jeff gives us a mention in his poem!

Introducing the poem, he said: “If you’re not from Bolton, it’s a bit like a tourist information guide.” Jeff, aka Jeffarama!, who compered Bolton Write Out Loud open-mic nights for 10 years before stepping down last year, performs in a band called Bard Company with Write Out Loud Wigan compere Ian Whiteley, and Tony Kinsella.

Background: Jeff's 10 years at the helm of Bolton Write Out Loud