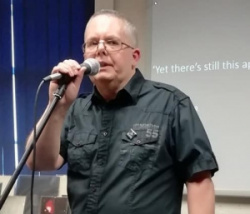 Write Out Loud is reluctantly saying farewell, and wholeheartedly offering our thanks and warmest wishes to one of our longest-serving poetry night organisers. Jeff Dawson aka Jeffarama! has been running Bolton Write Out Loud nights at various venues for the last 10 years, and Write Out Loud’s founder, Julian Jordon, paid tribute to him, saying Jeff had made “a magnificent contribution both to the cultural life of Bolton and to the work of Write Out Loud more generally”. Julian added that Jeff had “seen this work for what it is and seized the opportunities to help others by entertaining them and by helping them develop their own interests in poetry, music and self-expression, in a wide variety of ways”. He said that Jeff was also “a brilliant impresario, motivating and organising others to the benefit and fulfilment of so many people”.

Jeff, who has been aided and supported by co-compere Gordon Zola, acknowledged his sadness at the “end of an era” but added that after running the Bolton Write Out Loud nights for the last 10 years or so, “I've decided it's time to move on, and although that means no regular monthly night with me and Gordon Zola, I do plan to host a couple of one-off nights in 2022 at our current home Bolton Socialist Club, who may also run their own night.

“When I was first asked to host the Bolton night by Write Out Loud’s Paul Blackburn, I was delighted to take up the offer. After a particularly low point in my life, I had started to write and perform poetry and was moved that Paul, Dave Morgan and Julian thought what I did was good enough to take up this role. Poetry was a revelation to me, and I was immensely proud as Write Out Loud was founded in Bolton as well!

“Once I took the reins, I wanted to do something different and try a new venue. Although I had made my debut at the Howcroft pub where the nights were ably run by Val Cook, I didn't really like the room - it was long and wide and you were only really performing to those who were sat right in front of you. A mate of mine Mok and his wife Sarah owned another bar in Bolton – Butterflies. This was more modern with a PA system as Mok is a muso with Bolton punk band Billyclub.

“Butterflies Bar went down really well with poets old and new to Write Out Loud. We had some great nights there and I held my poetry and music nights'Guitar n' Verse there as well. Sadly due to the recession Butterflies had to close, so I managed to secure a room at The Wellington pub on Bury New Road, Bolton. But after a short stay here, the Wellington also closed for the same reasons. Undeterred, I managed to secure another venue at the Brooklyn Pub in Great Lever. We stayed there a few years, but yes, you've guessed it, that closed too!

“Although some folk were convinced we were a jinx to these venues, I managed to secure another venue where I was a member and regular with my girlfriend Tracy (who in addition to performing her own work and supporting me, sold hundreds of raffle tickets to help contribute to Write Out Loud over the years) - Bolton Socialist Club, where I also hosted the Wigan Diggers festival Bolton Bash.

“I'm pleased to say that, apart from Covid-19 disruption, the club is still open. We have had some great nights there and got more new poets involved, many of them club members who love it. I still plan to host a couple of events in 2022 under the Write Out Loud banner but feel the time is right to move on and bring the curtain down on the monthly event.

“I must admit, I am truly grateful for what Write Out Loud has done for me. It has opened so many doors and led to doing so many things - playing in bands (A Means to an End with poets/musicians Andy N, Petrova and Ian and Broken Strings with Petrova and Dave - yes I even learned to play guitar!), being part of festivals and performing at so many events in bands, solo or compering. I love performing and have met so many fantastic people on my journey, incredible after being in such a dark place. I plan to continue with events at the club, the Diggers festival, Strummercamp where I compere and also put more into our band Bard Company (with Ian and Tony) and get to a few more open mics!

In addition, doing all this I have been able to give other people a chance, and that means everything to me. Thank you all.”

And thank you, Jeff, from all of us at Write Out loud.