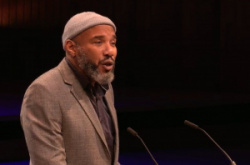 Anthony Joseph has won the £25,000 TS Eliot Prize for poetry for his collection Sonnets for Albert, it was announced on Monday night. The autobiographical collection follows on from his earlier work Bird Head Son, and focuses on his father. The chair of judges, Jean Sprackland, who was joined on the panel by 2021 Costa book of the year winner Hannah Lowe and 2019 TS Eliot prize winner Roger Robinson, said each of the shortlisted books “spoke powerfully to us in its own distinctive voice. From this strong field our choice is Sonnets for Albert, a luminous collection which celebrates humanity in all its contradictions and breathes new life into this enduring form,” she said.

Sonnets for Albert, which was shortlisted for the Forward prize for best collection last year, is an autobiographical collection that weighs the impact of growing up with a largely absent father. David Wheatley, reviewing the book in the Guardian, said that “after much silence and absence in life”, Joseph’s father was “painstakingly restored in death in a book-length ‘calypso sonnet’ sequence”. The review added: "Joseph’s relationship with his father is profoundly ambivalent, but Sonnets for Albert movingly makes peace with his shade."

In an interview Joseph himself has described his father as a "charismatic loner" who was "awkward and reticient with affection".

Trinidad-born Joseph - pictured at the TS Eliot Prize readings at the Royal Festival Hall, the night before the prize award - is a poet, novelist, academic and musician, who is currently a lecturer in creative writing at King’s College London. He is the author of five poetry collections, and has also written three novels, including the multi-award shortlisted Kitch: A Fictional Biography of a Calypso Icon. As a musician he has released eight critically acclaimed albums.

Bolton calling! Jeff Dawson recites poem on radio in support of town down on its luck ►