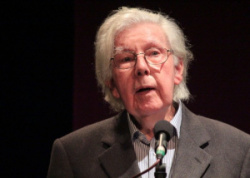 The oldest member of Suffolk Poetry Society, the celebrated writer and poet Ronald Blythe, has died at the age of 100. Seven years ago he spoke at Aldeburgh poetry festival, at an event reported by Write Out Loud. Here’s what we said:

“The appearance of venerated Suffolk writer and one-time Aldeburgh resident Ronald Blythe drew a packed audience to hear his reminiscences and a few of his poems. He recalled EM Forster pushing a note under his door soon after he came to Aldeburgh, inviting him for drinks: ‘They gave me a glass of sherry but nothing to eat.’ He became involved with Benjamin Britten’s Aldeburgh festival, and described the great composer thus: ‘Britten I was rather nervous of, an august figure … Peter Pears was a large figure in shorts, never said anything, but slightly threatening.’ Among the poems Blythe read was ‘Inland Gulls’ (“screaming salty platitudes”), which was set around Aldeburgh. Others were about the poet Sidney Keyes, who was killed in action at the age of 21 in 1943; Bonnie Prince Charlie; and another poetic hero, George Herbert (‘Hey Mr Herbert’). He also spoke of Aldeburgh-born poet George Crabbe, and his “love-hate relationship” with the town as a result of financial difficulties that resulted in him having to undertake manual labour: 'The humiliation of having to roll the barrels. Young people today don’t feel like that, but they did in those days.' Blythe was introduced at Aldeburgh by Maggi Hambling, sculptor of the famous Scallop on the beach.”

An extraordinary life. And Peter Pears seemed to still be playing Peter Grimes, except for the shorts perhaps.