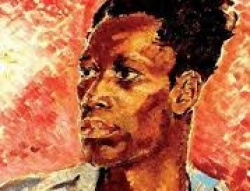 Jenny Mitchell’s impressive and award-winning two previous collections – both reviewed by Write Out Loud – were largely about Britain’s involvement in slavery, and its pain, misery and legacy as seen on a Jamaican slave plantation. This time she is writing about the present day, about men, and family, and often violence.

She opens the collection by listing ‘100 Ways of Saying Black’, some of which we would not reproduce in Write Out Loud. Some are just offensive, others are generalisations, stereotypes, or journalistic shorthand – “good at sport”, “high spirited”, “vivacious”, a 1968 quote from Enoch Powell, and even “Windrush generation”. Mitchell is unrelenting in her determination to highlight society’s ways of differentiating, both outrageously and more subtly. But as well as police and society behaviour towards black men, there is brutality at home, too, as in ‘brothers, 1970’:

beat the slaves, so the young boys

beg to be saved.

I must add at this point that I have never before come across so many sestinas in one collection. It is a disciplined poetic form that is difficult to perfect. But in ‘Sestina for the Black Policeman’ the form’s restrictions and repetitions help to demonstrate the confines that both restrain and protect a black policeman attacked by two white men: “Africa – the entire continent – moves in him like a tide / that means he has great stamina …/ the cordon, flexible enough to flow / into his limbs”. Another sestina, ‘A History of Attacks’, uses repetition to narrate a lifetime of attacks, from white and black, on an uncle whose “clothes meant more to him than friends”. In a third sestina, ‘One Bright Morning’, the “only black boy in the class” is hunted down in the playground, and eventually becomes a victim of knife crime. Others (Three Eyes Reading’, ‘Seven Stages of Dad’) record family brutality.

There are poems that celebrate difference, exemplified by hair, such as ‘Braiding’, ‘Barber off the Harrow Road’, and ‘Black Rapunzel’: “Family gathers in these plaits …”. A poem with a quite different tone, ‘Heavy Dub’, records the life and death of a man whose father left “as if a council flat could hold”, became a Rasta, “captive in a fog of spliff”, got into trouble with the police, was sectioned and treated with Lithium, which “levelled him / like cutting down a tree to praise the stump.” ‘Psalm 120’ is an obituary for a wife-beating, child-chastising father, who hid his thoughts, “refusing to come close or open up although / our house was cramped”.

There are poems about the “Windrush generation”, such as ‘When We First Reach’, which recounts how Caribbean people coming to Britain wore bright colours “to keep the sun alive”, but “these days is all we blacks who wear dull clothes. / Is progress this / or something sad we catch?” ‘Another Windrush Story’ tells of “Daddy” coming to England, dealing with discrimination, before finding an attic room “carpeted by mice”:

to take the fares. Shamed

by men who call him Boy

The final section, which also bears the collection’s title, is about an uncle, “My family call him spinster aunt”, who after suffering numerous catcalls and attacks, is beaten to death by a gang that celebrates each blow as if they are scoring goals (‘He Wore a Yellow Crown’):

But on this smaller island, sun informs

each bold flick of your wrist.

Taken by the gang as a red rag, they chase

you home, knock down, stamp hard

(‘Resurrection of a Black Man’)

Mitchell does resurrect her uncle, in poems like ‘He Looks Like Nat King Cole’, ‘A Man in Love with Plants’, and ‘Old Time Movie Stars’, overturning prejudiced and ignorant verdicts on his life. It is a traumatic but ultimately celebratory way to end another important collection, in which Jenny Mitchell confronts violence in domestic spaces and beyond head-on with startling images, and with poetic and forensic skill.

Poet of the borderlands: uncovering the riches of Northumberland with Noel Hodgson ►