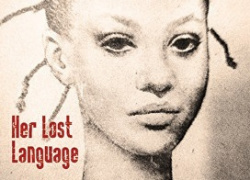 London-based poet and playwright Jenny Mitchell has had poems broadcast on Radio 4 and BBC2, and has conducted workshops in environments ranging from the Caribbean Women’s Writers Alliance, the NUT Black Teachers' Conference, the Clean Break Theatre Company and various summer literacy schools. Her poem ‘The Backslappers’ is used as a set text in secondary schools, and her debut collection Her Lost Language was a joint winner in the 2019 Geoff Stevens Memorial poetry prize.

About 15 years ago she decided to research the history of British transatlantic enslavement and this collection is an exploration of the impact of that enslavement on black lives and family dynamics. In an interview with Leela Soma of Bearsden Writers earlier this year Mitchell says that her main aim is to open up conversations between people of all races about this history. She believes that a lack of deep ownership and healing around this emotive subject is the cause of a great deal of collective trauma and dysfunction in society today.

The poems are divided into two sections. In the first section, which is entitled ‘My Family Shares its Voices’ Mitchell writes familial narratives that range from as far back as her five times great grandmother through to her grandparents and parents. These poems, set against a backdrop of "blue Jamaican hills" and Great Britain during "The Big Freeze", are inspired by archived material, photographs from family albums, anecdotes and personal recollection.

Mitchell’s poem ‘Emancipating Ancestors’ is dedicated to all those who died on slave plantations. It opens with these lines:

I’ll free them all

to haul their battered bodies

A few stanzas further on she writes:

I’ll pull out all the leaves

lodged in their throats,

replace them with my words

‘Strange Land’ is a prose poem written as narrative set in Great Britain in the winter of 1963. The lack of punctuation gives it a sense of urgency and the absence of a full stop at the end suggests that these injustices have not ceased but continue to engulf those who find themselves in similar situations to this day. The opening paragraph runs as follows:

References to clothing are prominent in many of the 38 poems in this collection. They may be “church going clothes,” “a uniform,” “a bridal veil,” or “hand-me-downs” being “beaten against rocks.” Clothing is seen as a mark of identity and a legacy. It also serves as a memory marker and is especially noticeable in ‘Someone Thank the Tailor’. Sometimes these clothes are identified so closely with the individuals who wore them that they become a part of them in their own right. In ‘Deep Mourning’ Mitchell writes: ‘When granny died her clothes began to speak. / Each tattered dress demanded to be burnt, / the shoes begged to be buried near the grave’.

One of the many strengths of this collection lies in the way Mitchell portrays the nature of a relationship by implication rather than by spelling it out in detail. In ‘The Mess They Made,’ for example, she hints at the relationship between her mother and father through the lens of the emotive power of photography: ‘With the family album on her knees, she touched / my father’s cheek more tenderly than when he was alive.’

The second, shorter section, which is more generalised with themes coming from further afield, is entitled ‘Eve’s Lost Daughter’. The title poem, ‘Her Lost Language’ appears at the end of this section and is the last poem in the book. In a guest post on the Proletarian Poetry website. Mitchell says that it was inspired by reports of Boko Haram in Nigeria, and their kidnapping, abuse and murder of girls and women, especially those seeking an education. She says: “I wanted to write about a woman who, having faced inhuman physical abuse, was being forced to endure the trauma of being ‘a stranger in a strange land’ that does not offer refuge … the fact that the character has come from a place where the ‘hills are shaped like God’ says something to me, about what we have lost – ‘God’ as nature.”

This is a powerful debut collection that speaks about many family histories, not just those of the writer, and bears testimony to Mitchell’s belief that narratives, previously suppressed, can help to bring about healing and reconciliation.