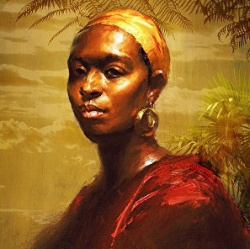 The cover illustration of Jenny Mitchell’s second collection, Map of a Plantation, is of a beautiful woman of dignified bearing, and is a detail from ‘Golden earring’ by Gregg Kreutz. It seems outrageous to say that there is much beauty in this book, when you consider Mitchell’s subject matter. But many of the poems have a tragic lyricism, as she mourns lives bought and sold; brutalised, exploited; murdered, lost.

Set on a Jamaican cane planation, and featuring a contrasting series of voices, there are haunting poems about hanged runaways; a plantation overseer who develops a stoop after beating a child for the first time; a mistress who is a victim too, and becomes mute.

‘Sweet Joe Pye’ focuses on a garden grown by a slave on unwanted land beside the stocks and the latrine, in memory of her stolen children, who have been snatched away and traded: “Butterflies adore the boy, adorn the small pink buds.”

‘In The Birthing Room’ features the horror of a teenage girl giving birth to a child fathered by her master:

A girl like me grabbed for her new born son

dashed him on the floor, cracked dead

before he could be branded, chained.

I’d never hurt my young though forced to bear.

A girl could act as maid, a boy as groom.

These jobs are dreams of glory. I’m worn thin.

At seventeen, my back aches all the time.

Dreams are lost as I buck hard.

A final stab. My child

flops on the bed as I fight rope.

She’s taken up, sold to another parish.

The slow demise of a once-feared master is catalogued in detail over a sequence of poems. In other poems Mitchell records the plight of those ‘gentlewomen’ beaten by brutal husbands who treat them as their property as much as their slaves.

There are poems about slave auctions, Emancipation Day, and the proclamation that ended slavery.  In the final section Mitchell moves to the present day (‘How I Write About Enslavement’):

I dig bones from a grave carried on my back

lay them on the page – blood full-stops.

Chains are brought up next, a tangled weight.

Whips the overseer soaked in salt

start a fire on my skin. Deep wounds

turn into welts, flower into sentences.

If you look hard, there are poems of consolation within this collection, too. ‘I Am The Song’ records the sweet, forbidden love between a maid and manservant who arrange to meet in the forest:

His touch becomes a chant. I am the song

will lead to freedom – I am almost certain.

Our bodies work themselves into a sweat.

We find release and both call out Escape.

These crafted and researched poems burn with righteous anger, and so they should. We cannot respond with ifs or buts, or weasel words about ‘different times’. Enslavement enriched and empowered the British empire. We should be ashamed. It’s time we were.