It's raining poets! Sheltering at Tynemouth's Under the Arches 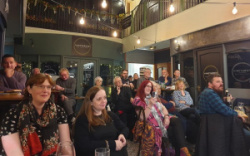 Maybe it was because the rain had stopped. It had been tipping it down for most of the day, and Under the Arches organiser Penny Blackburn had been anticipating a reduced turnout. Not a bit of it! The venue at Alfie and Fin’s bar in Tynemouth was bulging at the seams when we arrived, not long before kick-off time. So much so, that one or two of those who had already signed up for the open-mic agreed to be ‘bumped’ into the following month, to accommodate newcomers and latecomers such as, er, myself. 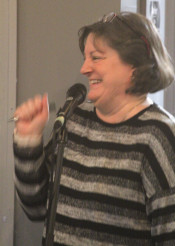 Penny, pictured, opened proceedings with a poem about her father truanting in the local library before leaving school at a very young age. Then the first of the open micers, Susan Olney, delivered a poem of self-incrimination, about something not very nice inflicted on her sister when a teenager. One of the vital roles an open-mic can play is to help vent and share, clear consciences, ask for previous poems to be taken into consideration.

There was more childhood angst from Ken Creen, on whether he was still entitled to receive presents from Santa, with a classic punchline, before Peter Afegbie’s moving poem about climate change with an African flavour, with its plea for “freedom for the Niger delta”, from addiction to the “opium of oil”.

Roy Matthew Heath was still in Halloween mode, with his poem about a confusion of witches –“Which witch was which?” – while Aaron Wright delivered nothing less than a brief history of the universe, in reverse.

As a fiction writer, the first guest of the evening, Jennifer C Wilson offered a change in pace. She was reading from her new collection of historical fiction short stories, which included a reference to the “fragile state of the enforced union between Scotland and England”. She finished with a short poem about ghosts, written for Writing magazine, that prompted her Kindred Spirits series of stories.

Steve May opened the second third with a poignant and amusing poem about being palmed off with various pets as a child – a goldfish, a budgie, a guinea pig – when all he really wanted was a cat. There were also contributions from Wayne Medford and Christine Fowler, as well as John Brown’s comic ‘The Tyne is mine’ and a poem by Dan Turner (“I was born just up the street”) extolling the birds he came across in the area. 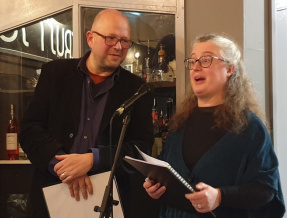 We then came to the wild card of the evening, poetry duo Steve Lancaster and his partner Emma Bowers, pictured. They had embarked on a series of poetry challenges, writing alternate lines, or sometimes verses, of a collaborative poem, often engaging in nifty wordplay. The results were often amusing and occasionally toe-curling, such as a poem inspired by a joint bathtime, and the idea that the “the universe is the aftermath of a giant bath-bomb”. Thanks for sharing that one with us, Steve and Emma! Actually, thanks for sharing all your poems. An impressive double act.

Apologies for not doing justice to the last open-micers of the night. No reflection on their quality; just the fact that I was distracted by my camera lens playing up. We heard Ross Punton, irritated by the early onset of Christmas promotions in November, Pauline May, J Archer Avary, and Hilary Elder, examining some of the oddities of teaching English as a foreign language.

The final guest poet of the night was Alexandra Corrin-Tachibana, reading from Sing me down from the dark, her debut collection which she launched the previous week at Waterstone’s in Newcastle. These are fascinating poems about her 10 years in Japan, taking in cultural differences between people and countries.

As for me, the wonderfully lively and packed Under the Arches was the fourth poetry event I’ve attended since arriving in the north-east four weeks ago. Each event has been quite different from the others, and long may it remain so. Penny Blackburn took pains to remind us of other events taking place in the locality, such as Dean Jolly’s launch of his collection As Tyne Goes By in North Shields tonight.  I just hope I’m beginning to get tuned into the rich poetry culture up here!

See more Under the Arches pictures

◄ 'The memories shift in their skins at every moon, to do their ripening'

Poet whose work was read out by MP publishes collection ►

I must thank Penny for her contribution to this write-up. Not only does she compere a brilliant night, she's a great photographer, too!

Visited Tynemouth for the very first time this summer! Lovely little beach, lovely fish n chips, lovely pint of Madri, lovely Market in the train station - and poetry too? Think I'll have to go back, Greg.

It sounds like a veritable deluge, Greg. Must have been great fun.