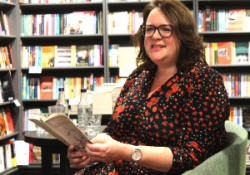 In 2017 Alexandra Corrin-Tachibana signed up for an MA – and began writing poetry. Five years on, she has published a collection of her poems, and on Friday night launched Sing me down from the dark at Waterstone’s in the centre of Newcastle.

At the launch the university lecturer described the “watershed moment” of enlisting for the poetry MA at Newcastle University: “I was a mum, a teacher, and I was looking for something else.” She confessed: “It was a bit random, I scrolled down the list, and thought, ‘Why the hell not?’ " She was soon writing poems, a lot of them during lockdown, and getting published in well-thought-of magazines. When lockdown ended, “I took every opportunity to go around the country and read. I read at a place called March in the Fens. I didn’t know my publisher was in the audience.”

She said of the moment when Salt asked her to submit a manuscript: “I didn’t see it coming … there was an element of luck. I wasn’t thinking of the wider end-product. I wasn’t really expecting any of it.”

Luck? Perhaps. But you make your own luck. The main theme of Alexandra Corrin-Tachibana’s collection is her 10 years in Japan. It’s a confessional and frank body of poems that takes in two international marriages, the struggles of cross-cultural relationships, and relationships with countries themselves.

We were second world war enemies, but it is said now that the British and Japanese have a lot in common. In her interview at the launch Corrin-Tachibana said: “It felt like home for a while, because I was married, and had people who really cared about me.” But in the collection the Japanese word gaijin, meaning foreigner or outsider, recurs. She even felt like that when returning to the UK: “I’d always felt a bit strange coming home … a reverse culture-shock coming back.” Her opening poem in the collection complains: “The trains are grubby … the sushi sucks …”  (‘Coming Home’). A prose poem observes that “stepping out at Heathrow I see Brits through non-British eyes. How overweight they are. How greasy their Fish n Chips.”

In her interview with Waterstone’s Alison Scurfield she explained: “It was very exciting at first, bathing in volcanic hot springs, doing karaoke, but not the karaoke we know. I started learning Japanese, married a Japanese man, got into the Japanese family experience. It was only when I went to America, because of my husband’s job, that I realised there was a world out there, beyond Japan.”

Corrin-Tachibana intended the collection to be a mixture of “light and dark”. Thus there are amusing poems about the body such as ‘Japanese Bathing Etiquette’ – “I’ve broken bathing rules … because of the tiny snake tattoo, on my left buttock” – and references to “Belgian chocolate willies, that lie stashed away, between my knickers” in a poem about a mostly long-distance affair. You can also learn quite a lot of Japanese words from reading this book.

And although she agrees that her poems are ‘confessional’, as well as often being about love, or lack of love, and food, she also added this: “Not all the details are strictly true. Poetry is a version of a truth.” It’s an interesting caveat for reading a collection that is both intriguing, and appears to be remarkably honest.

Alexandra Corrin-Tachibana, Sing me down from the dark, Salt, £10.99