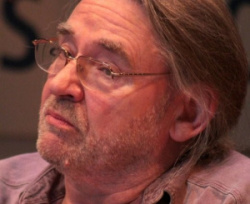 Veteran radical Tyneside poet Tom Pickard took part in an Enough is Enough rally in Newcastle on Saturday, one of a number of demonstrations that took place in cities around the country at the weekend  - and afterwards he called on other poets and artists to back the protests.

The campaigners were calling for fairer pay, a cut to energy bills, and an end to food poverty and poor housing. Tom read four poems at the rally at the Grey Monument in Newcastle’s city centre, held in advance of this week's Conservative party conference. Other speakers taking part included politicians, trade unionists, or from food banks, or other practical organisations “either offering ways to help the poor and beaten or offering solutions to change the system that brings the corruption about”, he said.

Among the speakers were local Labour MP for Wansbeck, Ian Lavery, and Si King, one half of the Hairy Bikers TV chefs, who said: “From this place today, go home, go to work, go to your communities and give people hope. We, the people, have the power, the compassion, the love, the kindness and the understanding and intellect to design and live in a world that cares about people rather than money and wealth.”

Afterwards he told Write Out Loud that he hoped that more poets and artists "of all disciplines will seek to form support groups to work with Enough is Enough and strikers. The way I see it, the strikers are out there fighting for all of us. They’re the front line. We can’t let them be picked off."

He added: "After the rally we joined the picket line at Newcastle Central Station. Lots of beeps of support from passing buses and cars. A strong sense of ‘we can do it’. Feels like a fight back, thank God."

Tom Pickard set up the famous Morden Tower readings in Newcastle in the 1960s with his first wife Connie, and rescued the poet Basil Bunting from obscurity. He has also produced and directed a number of documentary films.


The purpose of stopping bursaries and scholarships for teacher trainees in art and humanities subjects is frankly, to shut us up, through, as George Orwell put it, the "Prevention of Literature".

That will be achieved by destroying the windows through which we view society, hopefully changing it for the better.

Sneering attacks on the humanities by the likes of Dominic Cummings, and attacks on BBC 2, the Arts council, the OU and such as the South Bank Show by Rupert Murdoch and "client journalists", are responsible for such as London's Roehampton Uni and the Universities of Sunderland and Hallam ditching history and language courses.

Good to see that poets are protesting against injustice.