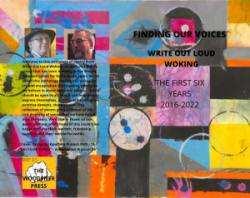 A Write Out Loud open-mic poetry group has just published its first anthology. Finding Our Voices – The First Six Years has been masterminded by Rodney Wood, co-host of Write Out Loud Woking with Greg Freeman.

The anthology foreword looks back to when the group was formed in 2016, and the first two years when it met at the back of the New Inn pub in the village of Send, just outside Woking. Then its live events moved to the café of the Lightbox art gallery in Woking, where it still meets. Meanwhile along came Covid and lockdown – and Zoom - and the group now also meets up monthly online.

In their foreword Rodney and Greg say: “We’ve called this anthology Finding our Voices, to try and encapsulate the founding principles we believe in about open-mic poetry – that it should be open to all, that it can help people express themselves, develop self-confidence, exorcise demons, share stories. This collection of poems gives a flavour of the rich diversity of voices that we have heard over the years.”

More than 50 poets are represented in the collection, including the late David Andrew, who died earlier this year, and was a staunch supporter of the group. The cover art is by abstract painter Geoffrey Pimlott, a regular reader with his wife Lorri at Write Out Loud Woking. The anthology also includes messages about Write Out Loud Woking from some anthology contributors.

Heather Moulson said: “I would say some of my best poetry moments have been [with] Write Out Loud Woking. It really opened doors for me and widened my poetry horizons.”

Veteran performer Nick Toczek, based in Bradford, has been a regular attender online. “The monthly readings run on Zoom by Greg and Rodney are one of my favourites of all such events. It’s been an utter joy to have been one of the participants.”

Matthew Paul said: “For me, the joy of coming along to Write Out Loud Woking was always that it was so welcoming. To my mind, that is exactly what an open mic should be about.”

The anthology will be launched at the group’s next online meeting on Wednesday 12 October, and again at the Lightbox on Thursday 27 October. 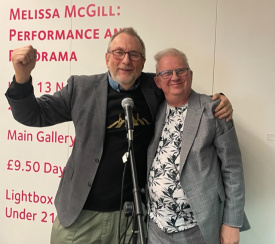 There was a capacity crowd at the Lightbox on Thursday night for the group’s penultimate event there before the venue switches to a quarterly format. Write Out Loud Woking will still continue monthly online.

It was also the last live night in Woking for co-compere Greg Freeman, who is moving to Northumberland but hopes to continue his links with the group on Zoom. Greg said: “It was a wonderful night to go out on. I would like to pay tribute to Rodney, for the original open-mic idea, for his enthusiasm in sticking with the project over these six years, and for coming up with this marvellous anthology. What a souvenir!”

Taking over from Greg as Rodney's new co-compere will be poet and reviewer Carla Scarano D'Antonio.

Copies of the anthology will be going out to contributors over the next few days. And you can order a copy of Write Out Loud Woking’s Finding Our Voices – The First Six Years here

Got my copy yesterday. A great read and an inspiration to other embryonic/fledgling poetry groups around the country.

Thanks very much for your good wishes, Sharron. And good luck with your continuing monthly live poetry night at the Solar Sisters cafe in Guildford

It certainly was a packed house on Thursday! Thanks to Greg and Rodney for organising and all the best to Greg for the move. Looking forward to buying a copy of the anthology 🤩