The Origin of Silence 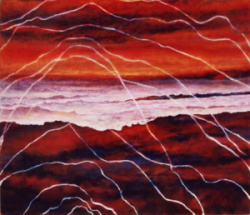 sparked by the howling of the seasons.

Those who pursued him knew nothing of his arts

They did not see him sewn into the four winds

They did not hear him no matter how loud he sang.

In this time of virus and plague true hunger bares its teeth.

A fierce breaking, a shaking and a flailing

A swooning and a sweating, a cruel fever falling

He sang in the darkness, he called in the light.

He plucked stars from the sky, placing them one by one

in the constellation of his heart.

Once more dreaming himself into the singing of his soul.

The noise and calamities of this world subsumed by

the self-struck sound of perfect silence.

Every heart turned to hear him carries the origin of silence

within the beating of their own.