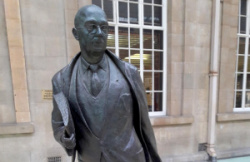 “What will survive of us is love.” This is the often-quoted final line of Philip Larkin’s poem ‘An Arundel Tomb’, which has not survived a rethink of a GCSE English literature course by an examination board, in favour of a more diverse range of authors. The first world war poem ‘Anthem for Doomed Youth’ by Wilfred Owen has also been discarded.

OCR, part of Cambridge University Press & Assessment, said it was revising its range of poets examined to “replace some Victorian and 20th-century poems which have either become overfamiliar through the assessment process, or which have proved to have unexpected difficulties or seemed less accessible for students”.

The Larkin poem will no longer be included in the ‘love and relationships’ section of the GSCE anthology, while Owen’s will disappear from the ‘conflict’ section. Poems by William Wordsworth, Lord Byron and Emily Dickinson will remain. The new authors include the award-winning British-Jamaican poet Raymond Antrobus and the Ukrainian poet Ilya Kaminsky, whose poem ‘We Lived Happily During the War’ is included. Kaminsky has recently published a collection of reports from poets whose homes have been occupied or attacked by Russian forces during its invasion of Ukraine.

“Our anthology for GCSE English literature students will feature many poets that have never been on a GCSE syllabus before and represent diverse voices, from living poets of British-Somali, British-Guyanese and Ukrainian heritage,” OCR said. “Of the 15 poets whose work has been added to GCSE English literature, 14 are poets of colour. Six are Black women, one is of south Asian heritage. Our new poets also include disabled and LGBTQ+ voices.”

The move was praised by Judith Palmer, chief executive of the Poetry Society. She said: “It’s fantastic to see this new selection of poems from OCR including poets from such a range of backgrounds and identities, writing in such diverse forms, voices and styles. We are sure young people will welcome the opportunity to study poems by some of the most striking new voices in contemporary poetry, alongside a refreshing selection of classic texts from diverse authors. These poems will speak powerfully to the experiences of young people today.”

There is a statue of Larkin, above, at Hull's Paragon rail station. But publication of the poet's private correspondence after his death in 1985 revealed a number of racist comments, and language about people of colour that is unacceptable as well as unprintable today.

However, the education secretary, Nadhim Zahawi, described the removal of Larkin and Owen from the syllabus as “cultural vandalism”. He added: “Larkin and Owen are two of our finest poets … Their work must be passed on to future generations – as it was to me. I will be speaking to the exam board to make this clear.” Zahawi insisted: “As a teenager improving my grasp of the English language, Larkin’s poems taught me so much about my new home. We must not deny future students the chance to make a similarly powerful connection with a great British author, or miss out on the joy of knowing his work.”

The minister has previously recounted how he arrived in the UK with a poor grasp of English after his family fled Iraq as refugees in the late 1970s. In a recent interview he said: “I couldn’t make any sense of the Telegraph because my English wasn’t good enough. But I started reading the Sun and it actually helped me improve my reading.”

Owen’s fiercely anti-war poem, now dropped from the OCR syllabus, mourns the deaths of youths “who die as cattle”. Its last line includes these memorable final words – at least to this 1960s school pupil … “each slow dusk a drawing-down of blinds”.

◄ Deadline nears for Foyle Young Poets of the Year

Most of these problems arise from the closure of grammar schools. A one-size fits all model of education just ends up suiting nobody and dumbing down standards to the LCD. The elite did not like (some of) the masses getting the same education their own children get; and the middle classes with low IQ children did not like them being branded as failures at secondary moderns.

Latin is not a dead language, all the Romance languages are built from it.

Education has suffered many a misfortune in recent years and all in the name of progress. I learned Latin at school and much to my personal edification as it opened up a gift for learning other languages. Decades back our Education System withdrew it from the common syllabus. It was deemed a dead language. In Spain they also took it off the syllabus and now it is back with many avid learners. Will we ever focus on what really matters?
Greg, thank you for this.
Keith

Wokeish emphasis upon diversity for diversity's sake. That box ticked then. It is the insight and beauty of the poem that matters not the ethnic origin of the poet.

JFK's comments about Larkin are well taken. The poet was
able to mix formidable insight with material that was well suited
to his time = expecially those lines about "Your Mum and Dad"!.

I personally think Larkin is a great introduction to English culture as it truly is - sexually repressed, hypocritical, agnostic/atheist, classist, sceptical and gloomy - for children from other cultures. That lesson cannot come some enough, IMHO.

Larkin was not just a great poet, he was also a great sociologist and cultural observer.

*Once they leave school, for most, that's it for poetry*

It's about time. I studied Owen over forty years ago at O Level. I love his work but my poetry education stopped at 1918. I'm amazed he's still on the syllabus.

And we definitely need more diversity. I remember my astonishment (in my late twenties) when I learned that Shakespeare isn't always done in Elizabethan costume. We are far too insular in our education system and should be telling our children about the wealth of diverse talent out there, especially of poets. How else will they learn of it? Once they leave school, for most, that's it for poetry.

"... I started reading the Sun and it actually helped me improve my reading.”

But did it help improve your politics, Mr Zahawi?

Selling England by the Pound?

Poetry is a wonderfully flexible and accessible art form. Like a
good pub, it is to be returned to for the content and the company
it offers. The wealth of poetry from UK and Irish poets alone is
formidable and refuses to be "categorised". How to choose
remains almost impossible to answer.