They Race Me In The Streets: Shaun Fallows, Lulu 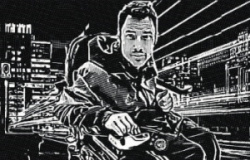 The title poem of Shaun Fallows’s second collection is uplifting and full of love. It tells how Fallows, a wheelchair user who has cerebral palsy, is surrounded by youngsters in the street who admire his chair. He in turn loves their curiosity, “long before they develop expressionless faces / Covered by headphones / Obsessing over grimy beats.” “These kids”, as he keeps referring to them, “decide to run beside me … egging me on / The working class iron-man.” It sums up his position and constant search: “My feet never ever touching the floor / But finding common ground.”

Shaun Fallows has been a familiar figure on the north-west open-mic scene for a number of years, becoming a popular face at Write Out Loud Wigan, his home town. During lockdown he ventured much further afield on Zoom, becoming a regular at the online version of Write Out Loud Woking, for instance. He missed the feeling of live nights, but at the same time relished the wider access that Zoom gave him.

This collection includes other poems of affirmation, such as ‘Up North’, ‘The Orange Clock’s Still Here (For Auntie Christine)', and ‘Teaching the Kids with ADHD’ (“But yeah, tough crowd / Tough crowd.”) There are also poems of longing and frustration: ‘One Careful Owner’; ‘I Can’t Tell’; ‘Leaving After Lockdown’; ‘The Girl In The Waiting Room’; and a poem with a title that says it all, ‘Message From A Man Who’s Been Up The Walls So Much He’s Sick Of The Sight Of The Wallpaper’.

There are probably more poems about disability than in his excellent debut book Access-Ability, which may reflect the frustrations of lockdown. ‘How Come?’ was written in response to the news that a shockingly high proportion of deaths in the pandemic were people with disabilities; and ‘The Term Disabled As Defined By Me’ reflects his feelings about the word itself: “A term to say thank God that’s not me.”

But when Fallows is able to get out, he looks outwards, such as in ‘The Ice Cream Woman From Milan’ (for Marie):

The ice cream woman from Milan

Saw me change from through all those years

From child to man

The ice cream woman from Milan

The last time I saw her

And I said I’d seen the old country

He finds himself in Bruges, rattling across the 14th century cobbles, at a time when there’s no one else around, and composes the most poignant poem in the collection as he observes two creatures’ devotion to each other:

I wanted to be like those swans so badly

Not a cold canal

But to have someone

He talks of his early life at school: “Tomorrow was something I didn’t think I wanted” (‘Tomorrow To Me’). There is an ode to his cat (‘My Beautiful Black And White Pick Me Up’), as well as an occasional dash of surreal comedy (‘The Woman Who’s Baby Was A Bag Of Chips’).

Understandably he did not react well to lockdown, and there are poems that reflect that, such as ‘Where Does Enthusiasm Go?’ and ’31 Thousand Thoughts And Counting’. But others reflect his spirit, determination, and joy at what he has achieved: “All you need to do is smile and accept your gift.” (‘The Fire Within’). And these lines from ‘The Bright Man For The Job’:

There’s no regret ‘cos I’m not really missing out

I could just as easily have been a celibate snob

But I’m none of those things.

May the fire within Shaun Fallows keep burning, fed by defiance, affirmation, love, and triumph. I’m sure it will.

Shaun Fallows, They Race Me In The Streets, Lulu, £7 plus p&p

Thanks for your comments, Dave. You've known Shaun a long time. I just came across this fine poet during lockdown and through Zoom.

Shaun isn't writing to please people now and get approval, he's writing to make them feel damned uncomfortable. And he's succeeding. Always slightly diffident about his performances in his early days as a writer/performer, his confidence and craftsmanship have soared over the past couple of years. If you're able-bodied don't expect an easy ride. We 're all complicit in the apartheid that affects so many people with disabílities. Shaun is very clever at identifying the barriers, evident and hidden that hinder full participation in everyday life. He's kept his Wigan sense of humour but you can feel the frustration boiling over at times. I hope the changemakers, whoever they are these days, read this and take the trouble to listen to a man on the front line of disability discrimination. He tells it straight.